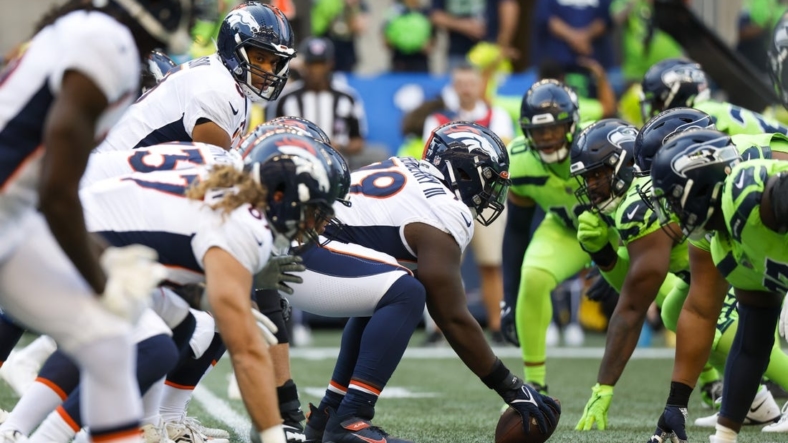 Russell Wilson is under contract for nearly a quarter of a billion dollars, but when the game was on the line Monday night at Seattle, Denver Broncos head coach Nathaniel Hackett opted to try a long field goal instead of letting his veteran quarterback get a first down on fourth-and-five.

Denver kicker Brandon McManus missed a 64-yard field goal attempt, the Broncos lost and Hackett admitted he should have left Wilson on the field. Chances are Wilson will lead an attempt if the same situation arises when Denver (0-1) hosts the Houston Texans (0-0-1) on Sunday.

The Broncos won’t have safety Justin Simmons on the field this week — and beyond. Simmons, who has started 66 straight games, was placed on injured reserve with a thigh injury on Wednesday and will miss at least four weeks.

It’s another blow to the defense, which played without inside linebacker Josey Jewell against the Seahawks due to a calf injury. He, along with fellow linebacker Randy Gregory (shoulder/knee), defensive lineman DeShawn Williams (back) and receiver KJ Hamler (hip/knee) didn’t practice Wednesday but only Simmons has been ruled out for Sunday.

Simmons had nine tackles and a fumble recovery in Denver’s 17-16 loss on Monday night.

“It’s hard to replace a guy like Justin Simmons,” safety Kareem Jackson said. “What he does for our defense, what he does in our locker room and for this team with his leadership. It’s tough.”

Sunday will be Wilson’s first home game in Denver. The Broncos traded for him in the offseason to solve the quarterback issue that has lingered since Peyton Manning retired after the 2015 Super Bowl season.

Wilson had a solid debut, throwing for 340 yards and a touchdown against his former team.

Houston hopes it has found a quarterback in Davis Mills after the Deshaun Watson drama moved to Cleveland. Mills had a good day against Indianapolis with 240 yards and two touchdowns, but the Texans had to settle for a 20-20 tie after leading by 17 entering the fourth quarter.

Both of Mills’ TD passes went to tight end O.J. Howard, but his main target against the Colts was receiver Brandin Cooks, who had seven catches on 12 targets for 82 yards. Houston head coach Lovie Smith said the team needs its other receivers, specifically Nico Collins and Chris Moore, to make an impact against the Broncos on Sunday.

“The production from (Brandin) Cooks was very good. What O.J. Howard was able to do was good, but we need more,” Smith said Wednesday. “A lot of times we had three receivers set and a tight end. There are more opportunities but that goes along with things we’ll need to improve upon.”

Houston has its own injury issues, but no one has been ruled out for Sunday’s game. Defensive lineman Maliek Collins (knee) was the only player who didn’t practice due to injury Wednesday.

Former Denver cornerback Isaac Yiadom (abdomen) didn’t play in the opener and was limited in practice, but looks likely to play Sunday if he doesn’t suffer any setbacks.