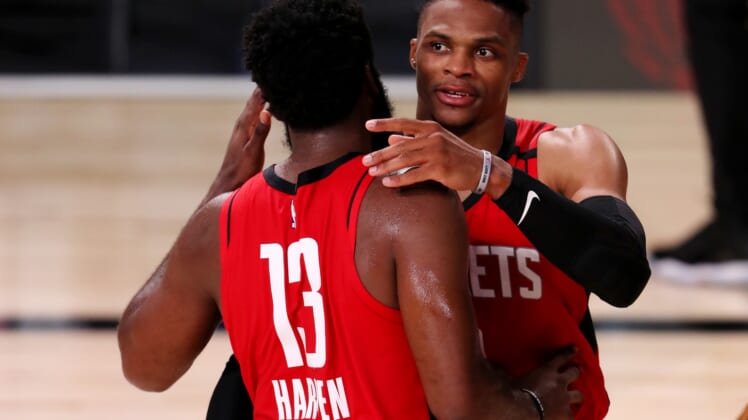 It was back in October of 2012 that the Oklahoma City Thunder broke up a trio that would ultimately see all three earn NBA MVP awards.

The Thunder’s decision to trade James Harden to the Houston Rockets ahead of the 2012-13 season for pennies on the dollar would prove to be costly for the organization. Harden, Russell Westbrook and Kevin Durant teaming up for multiples of seasons without winning an NBA title. One of the most successful championship windows that resulted with exactly zero titles.

By now, the story of these three future Hall of Famers is already known. Harden would go on to break records with the Houston Rockets. Durant ultimately left Oklahoma City for greener pastures in the Bay Area, earning two NBA Finals MVP awards while playing the part of a villain for the Golden State Warriors.

As for Russ, he remained the one lasting figure in Oklahoma City. The triple-double machine would team up with the likes of Paul George and others in an attempt to win that elusive title. To no avail.

Now more than a year since he was traded from Oklahoma City to Houston, teaming up with Harden once again, Westbrook finds his career at a crossroads. Houston also finds itself at a crossroads.

After appearing on the Rockets’ injury report in Aug. 5 with a quad issue, it’s now being reported that Westbrook will miss at least the start of Houston’s first-round playoff series against his former Thunder team.

Think about this for a second. Narrative street within the NBA bubble at Walt Disney World included the possibility of Westbrook and Harden going up against their former Thunder team. A lot on the line for Houston, especially given the team’s cap situation and the unwillingness of owner Tilman Fertitta to go into the luxury tax.

The backdrop here being an up-and-coming Thunder squad led by former Rockets guard Chris Paul who was jettisoned from Houston in the Westbrook trade quicker than renowned MLB whistle-blower Mike Fiers.

It’s all seemingly coming to a head in Houston. A Rockets team that has embarrassed itself in the playoffs during the Harden era now potentially set to see this run come to an end against the very same Thunder squad that jump-started the careers of Harden and Westbrook.

Any Rockets story must start and end with Mike D’Antoni

Before the 2019-20 NBA season was suspended back on March 11, reports surfaced that D’Antoni would be out of a job. He’s currently a lame duck head coach and will see his contract expire in October. Once the season came close to restarting, these reports did not change.

The Rockets in their current iteration are built under the guise of D’Antoni’s seven-seconds or less offense. A high-tempo scheme that seems to fit what Westbrook and Harden do the best. If D’Antoni himself is out of a job following this season, the future of this Rockets squad is obviously up in the air.

The Rockets have $111-plus million committed to the likes of Harden, Westbrook, Eric Gordon and Robert Covington next season. Given the current economic landscape of the NBA due to the COVID-19 pandemic, that’s a major issue. Four players taking up that more than the team’s projected $95 million cap. Again, the downturn in terms of league-wide revenue plays a role here.

This is in no way sustainable for the Rockets. Given the near $12 million Houston has committed to Danuel House and P.J. Tucker, that would give the team no real room to fill out the rest of an under-performing roster — pretty much all vet minimum players while selling off the contracts of Gordon and Covington.

Some may say the Rockets are a victim of circumstance due to the pandemic. That’s foolish. Every other team is dealing with the same economic reality. The fact of the situation is that a widely respected general manager in that of Daryl Morey overstepped his aggressive approach by trading for the expensive Westbrook last summer.

Despite boasting an estimated net worth of $4.1 billion, it has been noted on a never-ending loop that Houston’s new owner is unwilling to go into the luxury tax. This makes it impossible for the Rockets to deal away Westbrook’s bloated contract for multiple second-tier options to fill out the team’s roster.

Fertitta’s situation is also complicated by the fact that his net worth was created by building up the Landry’s Inc. brand, one of the largest restaurant corporations in the United States.

Chains such as Chart House, Bubba Gump and Claim Jumper exist under the umbrella of this corporation. Given how the restaurant industry has been impacted by the pandemic, it makes sense for Fertitta to play everything close to the vest. He did not build up this brand only to see it go to waste due to circumstances well beyond his control.

What would a loss to the Thunder mean for Houston?

The backdrop here is rather obvious. If the Rockets were to fall to a surprising Oklahoma City team in the first round of the 2020 NBA Playoffs, the ramifications for this organization would be widespread.

Lacking cap room and without draft pick assets following the Westbrook trade, there’s not much Morey could do to build up a contender in Houston. Add in the owner’s financial situation and the bloated Westbrook contract, and that’s magnified further.

The end result could be Houston’s Harden-led era coming to an end by the team deciding to trade the potential 2019-20 NBA MVP. It would be a way to start anew with a full-scale rebuild.

Harden has trade value in that he’s still a game-changer. Westbrook doesn’t have that same value. Moving the former as a way to add draft assets in order to trade Russ could ultimately be the end game here.

Wouldn’t it be fitting? Houston’s run of regular-season dominance coming to an end against the team that helped build the franchise into a relevant NBA entity by trading Harden to the Rockets some eight years ago. It coming to an end in the postseason after so many years of playoff failures.

Let that sink in as the 2020 NBA Playoffs start here soon.