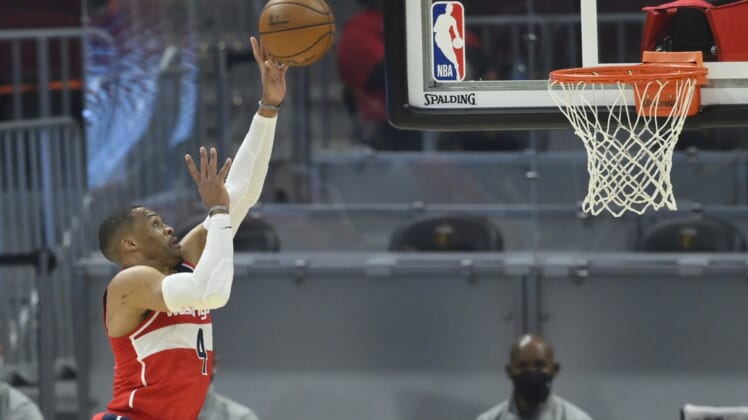 Russell Westbrook recorded his 31st triple-double of the season with 15 points, 12 rebounds and 11 assists, and the Washington Wizards cruised to their 10th win in the past 11 games with a 122-93 rout of the Cleveland Cavaliers, Friday in Cleveland.

Washington (29-34) closed the third quarter on a 23-4 run that proved decisive. The spurt marked the culmination of an outstanding defensive night for the Wizards, holding Cleveland to just 34-of-82 shooting from the floor and forcing 24 turnovers.

Washington converted those takeaways into 30 points. The Wizards finished with advantages of 66-46 scoring in the paint and 16-10 on fast-break points.

Westbrook, meanwhile, concluded a historic month with his 14th triple-double. He surpassed Wilt Chamberlain’s old record of 11 in a single month against San Antonio on Monday, and finished the month with three straight.

Friday’s win marked the 12th in Washington’s past 14 games, as the Wizards make a late push for the Eastern Conference playoffs. Their win at Cleveland pulled them to within a half-game of ninth-place Indiana, which was idle on Friday.

Cleveland (21-42) dropped its fifth straight with Friday’s decision. Collin Sexton led all scorers with 22 points, but committed eight turnovers and shot just 1-of-6 from 3-point range.

The Cavaliers shot 7-of-33 from beyond the arc as a team, while Washington finished 8-of-18.

Jarrett Allen recorded a double-double with 13 points and 11 rebounds, Darius Garland added 12 points and Cedi Osman scored 14 points off the bench for Cleveland. Kevin Love grabbed 10 rebounds, but did not attempt a field goal and finished scoreless.