Russell Westbrook saves the Washington Wizards in win over Pelicans 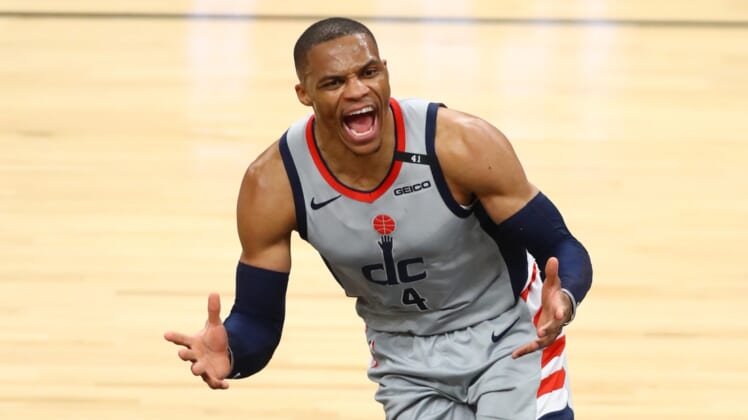 Russell Westbrook made two free throws with one second left in overtime to finish with 36 points as the host Washington Wizards defeated the New Orleans Pelicans 117-115 on Friday night.

Westbrook, who had 10 of the Wizards’ 12 points in overtime and assisted on the other basket, finished with 15 rebounds and one assist short of what would have been his seventh consecutive triple-double.

The score was tied when Raul Neto stole the ball from the Pelicans’ Zion Williamson with 15.5 seconds left, leading to Williamson’s foul on Westbrook. New Orleans’ challenge to the call was unsuccessful and Williamson fouled out on the play.

Bradley Beal added 30 points and Daniel Gafford had 18 for the Wizards.

Brandon Ingram scored 34, Williamson had 21, Naji Marshall had 16 points and 11 rebounds and James Johnson scored 11 to lead the Pelicans.

The Wizards made just 2 of 22 3-pointers in regulation, but Westbrook made two in a row and added another field goal to give the Wizards a 113-109 lead midway through the overtime.

Eric Bledsoe and Marshall each made two free throws to tie the score, and it was tied once more before the frantic finish.

The Wizards held a one-point halftime lead before Williamson had two baskets during a 10-0 run that gave the Pelicans an 80-72 lead.

Beal scored seven straight Wizards points to help them pull within 87-84 at the end of the third quarter.

Willy Hernangomez made consecutive baskets as New Orleans increased its lead to 101-92.

Beal made a layup for Washington’s first field goal in nearly five minutes to cut the deficit to 103-98.

Williamson scored on a drive before Westbrook’s basket tied the score at 105 with 1:07 remaining.

Washington had the last possession of regulation, but Beal missed a 3-pointer at the buzzer.

The Wizards had a 30-29 lead at the end of the first quarter even though Ingram scored 14 points during the period. They led 62-61 at halftime.