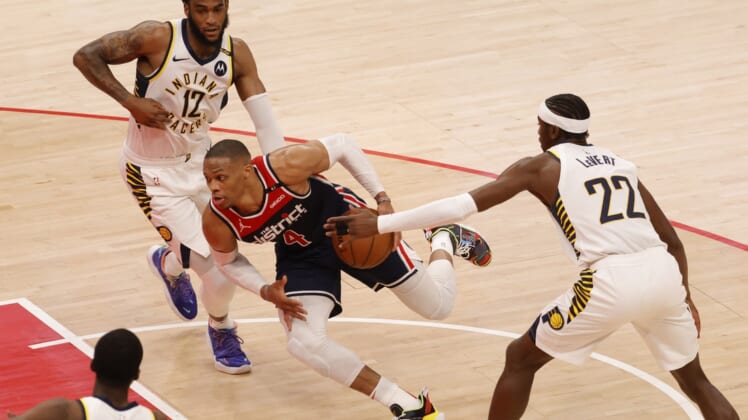 Russell Westbrook recorded his 32nd triple-double of the season with 14 points, a career-high 21 rebounds and 24 assists to lead the host Washington Wizards to a 154-141 victory over the Indiana Pacers on Monday night.

Westbrook’s assist total matched a franchise-record and his career-high.

The Wizards (30-35), who hold the 10th seed and final spot in the Eastern Conference play-in round, won for the 13th time in their past 16 games and pulled to within a half game of the Pacers (30-34) for ninth place and secured the head-to-head tiebreaker between the teams.

Washington pulled a full three games ahead of the 11th-place Toronto Raptors as well.

But nine Wizards scored in double figures, including five reserves, and Washington outscored Indiana by a staggering 96-60 margin in the paint.

Daniel Gafford (7-for-7 from the field) had 15 points and Davis Bertans had 14. Chandler Hutchison and Ish Smith each had 13 points. Alex Len scored 12 points and Robin Lopez added 11.

Washington scored 46 points in the second quarter and 82 in the first half, shooting 57.1 percent from the field. The Wizards had 27 assists on 32 made field goals in the first half and finished with a season-high 50 assists overall. Washington also had 30 fast-break points to Indiana’s four.