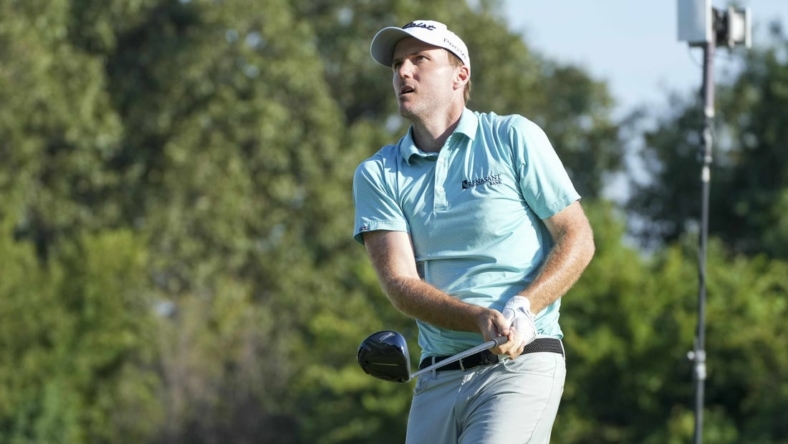 Russell Henley is running away with the World Wide Technology Championship at Mayakoba in Riviera Maya, Mexico.

Henley, who entered Saturday with a three-shot lead, fired a 65 to take a six-shot lead into Sunday’s final round. Henley put more distance between himself and his pursuers on moving day and sits at 22-under 191.

Patton Kizzire (third-round 67) and Will Gordon (68) are tied for second at 16 under at El Camaleon Golf Club.

Henley carded another bogey-free round, opening his day with a birdie and finishing with six for the round.

Asked about his six-stroke lead, the largest 54-hole lead on Tour since Jon Rahm at the 2021 Memorial Tournament, Henley demurred.

“I don’t know,” Henley said. “I mean, I’m just going to try to get my mind off of golf a little right now and get some dinner and watch a little football, maybe watch the World Series and just kind of go into tomorrow, new day and just do the best I can.”

Henley recorded the 18th opening 54-hole total of 191 or better in PGA Tour history. The previous 17 all went on to win.

“I wouldn’t say I’m clear because you can make a lot of birdies out here, but I don’t think I’ve ever had a lead like this,” Henley said. “It’s definitely tough to finish golf tournaments, so I’m just really trying not to think about the score and just think about each shot.”

Kizzire posted seven birdies on Saturday but also three bogeys. His recipe for trying to reel in Henley is staying aggressive.

“I’ve been very aggressive, so I don’t think there’s any way I can be more aggressive than I’ve been,” Kizzire said. “I’ve just got to execute with that aggressive mentality and see what happens.”

There were two holes-in-one during the third round: Seamus Power (No. 8) and Greyson Sigg (No. 10).