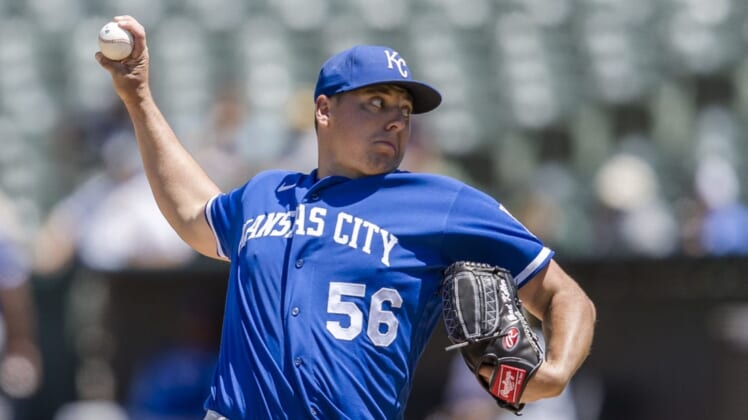 Right-hander Brad Keller threw seven innings of one-hit ball and Ryan O’Hearn’s pinch-hit, RBI double broke a scoreless tie in the top of the seventh as the Kansas City Royals made it two straight over the host Oakland Athletics with a 2-0 victory Saturday afternoon.

Michael A. Taylor scored the game’s first run after smacking a one-out triple in the seventh off Oakland starter Cole Irvin (2-4).

When the A’s pulled the left-hander in favor of righty Domingo Acevedo, the left-handed-hitting O’Hearn was called upon to pinch hit for Emmanuel Rivera and came through with his RBI double.

The pinch-hit was O’Hearn’s seventh in 12 at-bats this season. He leads the majors in pinch hits.

The Royals added an insurance run in the ninth when Kyle Isbel was hit by an A.J. Puk pitch, was sacrificed to second by Nicky Lopez and raced home on a single to left field by Whit Merrifield.

Keller (2-8), who had been 0-6 in his last seven starts, allowed just one baserunner – a leadoff walk in the third to Elvis Andrus – before losing his no-hit bid on Jonah Bride’s two-out double in the sixth.

The fifth-year major-leaguer then walked Tony Kemp and Seth Brown to load the bases in a scoreless game before retiring Ramon Laureano on a fly to right.

Staked to a 1-0 lead in the top of the inning, Keller worked a 1-2-3 seventh before handing the ball to the Royals’ bullpen. He walked three and struck out six.

Down one, the A’s got the potential tying run into scoring position with one out in the eighth on a double by Luis Barrera. But Jose Cuas got Bride on a comebacker, and closer Scott Barlow ended the threat by inducing Kemp to foul out to the catcher.

Barlow protected a two-run lead with a 1-2-3 ninth, recording his eighth save and completing the Royals’ fifth shutout of the season.

Irvin allowed just one run and three hits in 6 1/3 innings. He walked two and struck out six.

The triple by Taylor and double by O’Hearn were the only extra-base hits for the Royals, who out-hit the A’s 7-2.

The shutout loss was Oakland’s eighth of the season. Both of the A’s hits — by Bride and Barrera — were doubles.