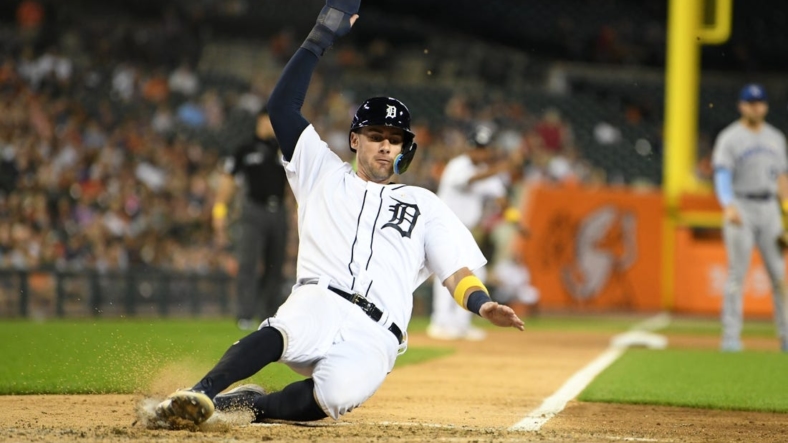 The Kansas City Royals got a big scare in their third consecutive loss on Friday.

Star catcher Salvador Perez came out of the road game against the Detroit Tigers after getting hit in the right hand by a pitch. X-rays were negative and Perez was diagnosed with a contusion.

“It’s going to be sore for a bit,” Kansas City manager Mike Matheny said postgame. “We’ll wait and see what it looks like tomorrow.”

It’s unlikely Perez will play Saturday in the middle game of a three-game series. Kansas City’s Jonathan Heasley (2-7, 5.22 ERA) is due to start against Detroit’s Michael Pineda (2-6, 5.27) in a battle of right-handers.

Heasley collected a victory in his most recent outing. He gave up four runs (three earned) and four hits in five innings against the San Diego Padres on Sunday while striking out a career-high-tying seven batters.

Heasley gave up two more home runs, raising his total to 15 surrendered in 70 2/3 innings. However, his teammates supported him with a season-high 15 runs.

In his only career outing against Detroit, Heasley tossed 5 1/3 scoreless innings last September but didn’t get a decision.

Pineda will make his first start for the Tigers since July 23, as he was activated from the injured list on Thursday after recovering from a triceps injury. He had another stint on the IL this season due to a broken finger.

He had three rehab outings for Triple-A Toledo to prepare for his return to the majors, going 1-0 with a 4.63 ERA. In his most recent appearance, Pineda gave up two runs in five innings against Louisville on Sunday.

Pineda faced Kansas City twice in a 10-day span in July and took the loss in both outings. He gave up three runs in five innings in a home start on July 1 and three runs (two earned) in 5 1/3 innings at Kansas City on July 11.

Tigers infielder Ryan Kreidler made his major league debut on Friday, starting at third base while Jeimer Candelario was rested.

Kreidler will play a utility role as manager A.J. Hinch mixes and matches his lineups.

“We’re going to move him around,” Hinch said. “His first three starts are likely to be at three different spots. We’re going to have some shared playing time around the diamond.”

Hinch said he plans to use Kreidler at second base on Saturday and either shortstop or designated hitter on Sunday.

Kreidler might have been called up sooner from Toledo if he hadn’t sustained a fractured right hand in late April and a groin injury shortly after he returned to action.

“Getting hurt is never in your control when you get hit by a pitch. Just some bad luck,” Kreidler said. “But the fact is, I’m here now and it’s really rewarding to be here.”

Kreidler made a big contribution in his debut, drawing two walks and scoring twice in the Tigers’ 5-4 victory.

“Super fun,” he said. “Got the nerves out somewhat. I think I’ll still be nervous tomorrow and the next day, but it’s all good.”

Matheny lamented his pitchers’ walks, which led to three of Detroit’s runs.

“In a close game like that, the free bases are what’s going to be the deciding factor,” he said.

One player who won’t be in the Tigers’ lineup the remainder of the season is outfielder Austin Meadows. He revealed on Friday that he is been dealing with mental health issues, as well as a variety of physical ailments, leading him to take the rest of the 2022 season off.