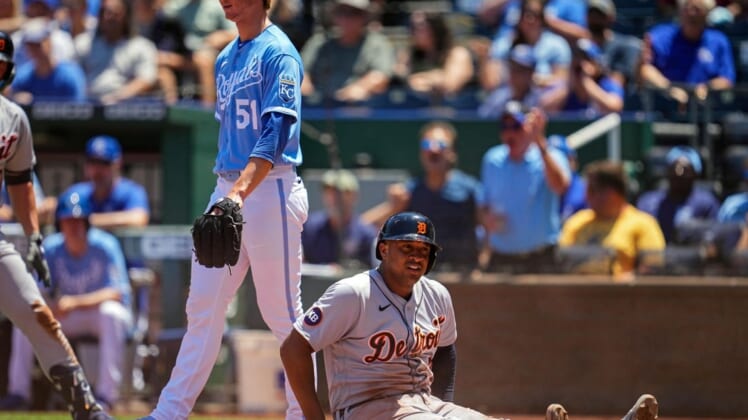 Hunter Dozier had a single and an RBI triple to help the Kansas City Royals defeat the visiting Detroit Tigers 5-2 Wednesday afternoon in the finale of a four-game series.

The Royals won three out of four against the Tigers for their second straight series win at home after not claiming one since April.

It was Kansas City’s first win this season when trailing after the first inning (1-23).

Brady Singer (4-3) allowed one run on seven hits in six innings. He struck out six and walked five.

Scott Barlow pitched the ninth for his 15th save in 17 chances.

The Royals walked six, the 21st time this season they’ve walked at least six batters in a game. They lead the majors with 346 walks.

The Tigers loaded the bases in the first but managed just one run. Harold Castro hit a sacrifice fly to left that scored Riley Greene, who led off the inning with a single.

Singer worked around trouble in the fourth. The first two runners reached and Jeimer Candelario singled to right, but Edward Olivares threw out Jonathan Schoop at home.

The Royals scored four in the bottom of the fourth. Andrew Benintendi and Dozier reached on one-out singles. Emmanuel Rivera then pulled a double down the line, scoring Benintendi. Vinnie Pasquantino reached on a fielder’s choice without an out, loading the bases. Olivares then hit a line drive off the glove of Schoop for an error, scoring Dozier and Rivera. Pasquantino scored the fourth run on a sacrifice fly by Nicky Lopez.

The Royals added another run in the fifth when Dozier tripled to drive in Bobby Witt Jr., who led off the inning with a single.

Singer faced the bases loaded with one out again in the sixth but struck out Spencer Torkelson and Akil Baddoo to end the inning and his day.