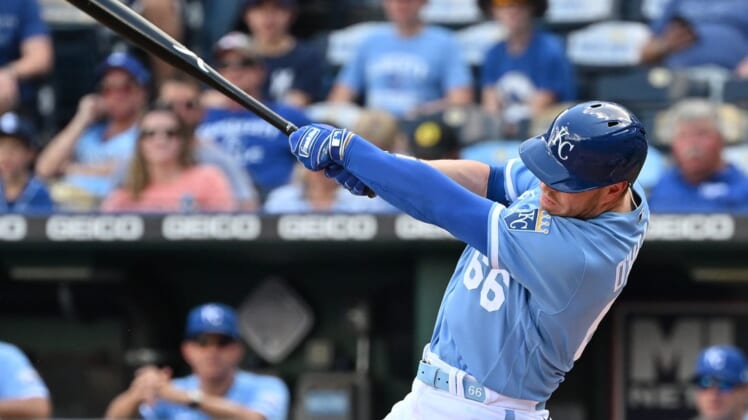 Salvador Perez and Ryan O’Hearn each had two hits and an RBI to help the Kansas City Royals to a 6-4 win against the visiting Chicago White Sox in a makeup game on Monday afternoon.

Amir Garrett (3-1) pitched a perfect eighth for the Royals and Scott Barlow worked the ninth for his 20th save.

Elvis Andrus had two hits and three RBIs and Jose Abreu had three hits, two walks and two runs for the White Sox.

White Sox starter Michael Kopech left after facing four batters because of a sore knee. All four batters reached base and Kopech was charged with four runs on one hit, two walks and a hit batter.

Joe Kelly (1-3) started the eighth for Chicago and hit Michael Massey and Michael Taylor with two of his first three pitches. O’Hearn then singled to left on the first pitch to load the bases with no outs.

After getting a forceout at the plate, Kelly walked Drew Waters to force in a run and give the Royals a 5-4 lead. Jose Ruiz came in and gave up a sacrifice fly to MJ Melendez to make it 6-4.

Kopech started the game by walking Melendez and hitting Bobby Witt Jr. with an 0-2 pitch. Perez singled to right to drive in Melendez for a 1-0 lead. Another walk to Vinnie Pasquantino ended the day for Kopech.

Jimmy Lambert came in and surrendered an RBI single to Massey to make it 2-0, and Taylor walked to force in another run for a 3-0 lead. Another RBI single by O’Hearn made it 4-0.

Royals starting pitcher Daniel Lynch, who had not allowed an earned run in two previous starts against the White Sox this season, breezed through the first three innings before giving up three straight singles in the fourth to Eloy Jimenez, Abreu and Andrew Vaughn to trim the lead to 4-1.

Andrus singled home two more runs to make it 4-3, the first RBIs for Andrus since he was released by the Oakland Athletics last week and claimed by Chicago.

Lynch allowed three runs and seven hits in 4 2/3 innings. He did not record a strikeout and walked four.

Dylan Coleman walked two of the first three batters he faced in the seventh inning before Andrus laced a double down the left-field line to tie the score 4-4.