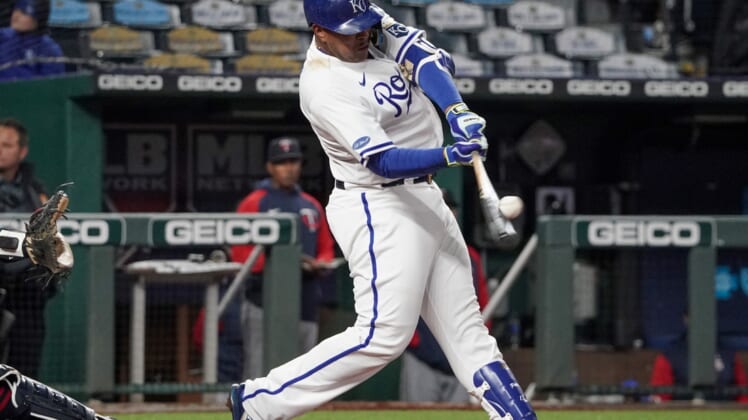 Salvador Perez hit two home runs and Hunter Dozier delivered a go-ahead blast to lead the Kansas City Royals to a 4-3 home victory over the Minnesota Twins in the first game of a three-game series Tuesday night.

Perez’s second multi-homer game of the season and the 14th of his career helped make a winner of reliever Amir Garrett (1-0). Josh Staumont, the fifth Kansas City reliever of the night, earned his second save.

The Twins had three hits in the third but didn’t score. Gary Sanchez led off with a double, followed by a single by Ryan Jeffers. However, Michael A. Taylor threw a one-hopper to home to nail Sanchez.

The Twins challenged, but the call was confirmed. Luis Arraez then singled, moving Jeffers to second, but Hernandez retired the next two batters.

The Twins scored two runs in the fourth. Nick Gordon tripled to right center with one out. With the infield in, Gio Urshela lined one into right, scoring Gordon. Sanchez had his second straight double with two outs, scoring Urshela.

Perez, who moved from catcher in the original lineup to designated hitter because of blurred vision, answered with a one-out home run in the fourth. It was Perez’s third home run of the season and the first earned run allowed by Chris Archer in 7 1/3 innings.

The Twins were back at it in the fifth. Arraez led off with a double. After Jorge Polanco lined out, Carlos Correa singled in a run, and starter Carlos Hernandez’s night was done. Six of the final eight batters Hernandez faced hit the ball at least 95 miles per hour. The other two were 90+ mph.

The Royals missed out on a big opportunity in the fifth. They loaded the bases with one out. Nicky Lopez then walked, forcing in a run and ending Archer’s night. But Joe Smith induced Bobby Witt Jr. to hit into a 6-4-3 double play to end the threat.

The Royals grabbed the lead in the sixth against Tyler Duffey (0-2). Perez led off with his second homer to tie it. Dozier then blasted one 429 feet over the bullpen in left.