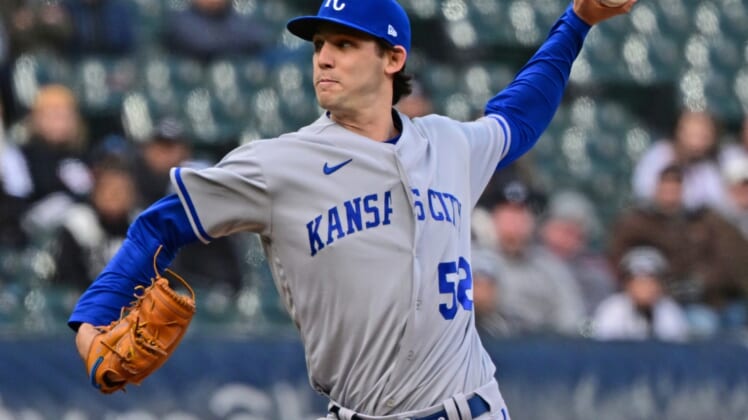 Carlos Santana’s two-run single keyed a four-run sixth inning as the Kansas City Royals snapped a four-game losing streak with a 6-0 victory over the White Sox on a cold, blustery night in Chicago.

Game-time temperature was 50 degrees, but it dropped quickly, along with gusty winds that made it feel much colder.

The White Sox suffered their eighth straight loss as Chicago pitchers walked 11 Royals. The last time the Royals’ offense received 11 walks was in 2011.

Royals shortstop Adalberto Mondesi left the game in the sixth inning with left knee discomfort after a pick-off attempt.

Daniel Lynch (2-1) allowed two hits in six innings for the win. He tied a career high with seven strikeouts. He has thrown 11 straight scoreless innings in his last two starts.

Chicago starter Dallas Keuchel (1-2) gave up two unearned runs on two hits in four-plus innings. Five walks, the most he has ever had against the Royals and one off his career high, did him in. He came out after throwing 88 pitches.

Neither offense could get going in the first three innings. Lynch allowed a bloop single off the handle to Jose Abreu, plus a walk and a hit batter. Keuchel allowed just a pair of walks.

The Royals put a pair of runs on the board in the fourth without a hard-hit ball. Salvador Perez reached on an error by Abreu at first, leading off the inning. It was Chicago’s major-league-leading 19th error of the season.

Santana followed with a walk. Both runners moved up on a slow roller by Hunter Dozier. Bobby Witt Jr. then dribbled a single up the third-base line, scoring Perez. Mondesi then drove in Santana with a groundout.

With two outs, Keuchel walked Michael A. Taylor and Nicky Lopez to load the bases for Merrifield, who struck out.

Taylor’s sacrifice fly in the sixth drove in the Royals’ third run and Andrew Benintendi flied into a fielder’s choice for the fourth run before Santana broke it open.