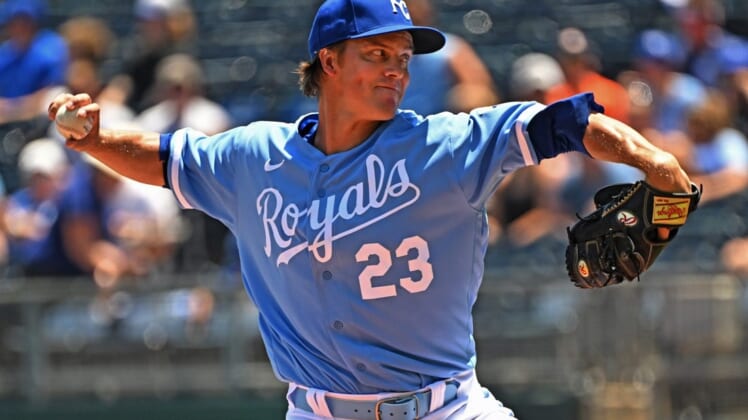 MJ Melendez drove in two runs and Zack Greinke tossed five shutout innings as the Kansas City Royals beat the visiting Cleveland Guardians 5-1 in the rubber match of a three-game series on Sunday.

Greinke (3-5) allowed three hits with one walk and five strikeouts. Jose Cuas, Dylan Coleman, Taylor Clarke and Joel Payamps each pitched an inning of relief to seal the victory.

After recording a season-high 23 hits in a 13-1 victory on Saturday, Cleveland was limited to five hits in the series finale. The Guardians scored their lone run in the ninth when Owen Miller scored from third on a wild pitch.

Kansas City grabbed an early advantage in the second against Zach Plesac (2-7) when Kyle Isbel’s two-out single scored Hunter Dozier from second base.

The Royals added to their lead with three runs in the fifth.

Melendez then drove in two runs with a bloop single to right-center field before being thrown out attempting to reach second base.

Plesac allowed four runs (three earned) on six hits over five innings. He walked one and struck out five.

Kansas City tacked on another run in the sixth on Nicky Lopez’s two-out RBI single against Sam Hentges.

The Royals then loaded the bases before Enyel De Los Santos replaced Hentges and got Witt to ground out to escape the jam.

The Guardians put the first two runners on base in the seventh before Coleman retired the next three batters in order to end the inning.

Reyes went 0-for-4 with four strikeouts for Cleveland, which ended a five-game losing streak on Saturday.

Dozier and Isbel had two hits apiece for Kansas City, which continues its seven-game homestand with a doubleheader against the Detroit Tigers on Monday.