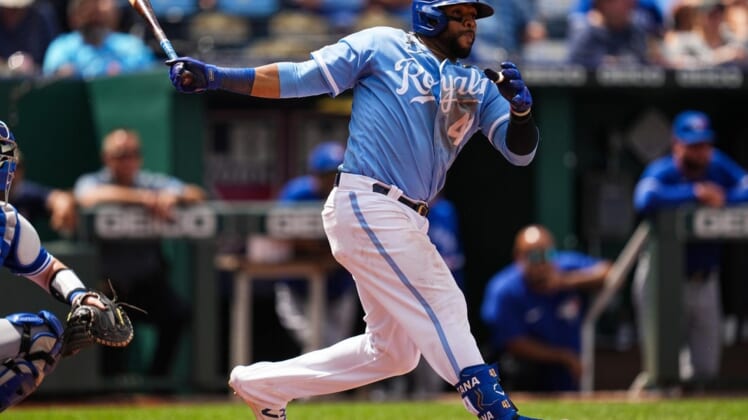 The Royals had lost the first two games of the series by shutout.

It was Santana’s first four-hit game of the season.

Royals starter Brady Singer (3-1) picked up the win, allowing three runs on eight hits. He struck out five and didn’t walk anyone. Since returning to the big-league roster May 17, Singer has walked just three in 29 2/3 innings. He’s escaped without issuing a walk in four of his five starts.

Toronto starter Yusei Kikuchi didn’t escape the first inning, allowing three runs on two hits and four walks. He exited with the bases full but reliever Trent Thornton got Nicky Lopez to ground into a fielder’s choice to end the inning.

MJ Melendez dropped a two-out double in the first inning, driving in Andrew Benintendi and sending Bobby Witt Jr. to third. Emmanuel Rivera then singled in both Witt and Melendez.

Raimel Tapia hit a one-out home run in the second to put the Blue Jays on the board.

Zack Collins, called up from Triple-A Buffalo on Tuesday, homered leading off the third in his first at-bat since his recall. Vladimir Guerrero Jr.’s RBI groundout tied the score at 3-3.

The Royals regained the lead in the fourth.

Benintendi drew a one-out walk. He went to third on a single by Witt. Salvador Perez drove in Benintendi and sent Witt to third with a single. Witt then scored on a fielder’s choice by Melendez.

The Royals added another run in the fifth on an RBI double by Michael A. Taylor, driving in Santana.

Perez had a one-out triple in the sixth, his first since 2017. He scored on Santana’s third hit of the game. Whit Merrifield drove in Taylor with a double in the seventh.

The Jays got a run in the ninth on an infield single and an error.