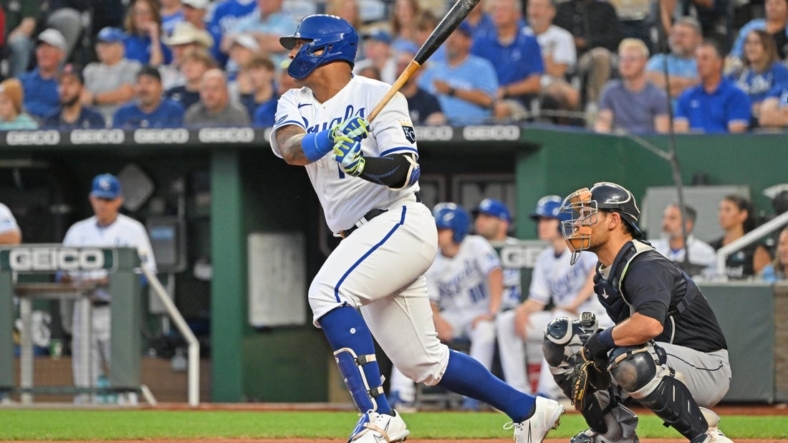 Salvador Perez hit a sacrifice fly in the ninth inning to lift Kansas City to a 2-1 victory over the visiting Cleveland Guardians on Wednesday as the Royals rallied to salvage the finale of a three-game series.

MJ Melendez drove in the tying run with a ninth-inning single. Bobby Witt Jr. was walked intentionally before Perez came to bat.

The Guardians came into the series with a five-game losing streak and tied with the Minnesota Twins at the top of the American League Central.

Cleveland (70-65) still increased its lead in the division to two games as the Twins were swept in three games by the New York Yankees. The Chicago White Sox, who took two of three from the Seattle Mariners this week, are now also two games back.

The Royals (56-82) improved to 5-8 against the Guardians this season. The clubs will end the season with a six-game series in Cleveland.

Scott Barlow (6-4) picked up the win after throwing a 1-2-3 top of the ninth. Emmanuel Clase (2-4) took the loss. He walked the first two batters in the ninth to set up the decisive rally.

In his first start back from the injured list, having recovered from right forearm tightness, Kansas City’s Zack Greinke allowed just one run on six hits in six innings. He walked one and struck out two. It was the seventh time in 22 starts this season that he pitched at least six innings.

The Guardians got on the board in the fourth inning. Oscar Gonzalez doubled to the wall in right-center leading off. He went to third on a groundout and scored when Owen Miller’s hit dropped in front of center fielder Drew Waters.

Gonzalez added another double in the eighth inning. He hit a game-winning double in the 10th inning of the Guardians’ 6-5 win over the Royals on Monday.

The Royals had runners on first and second with one out in the eighth, but Bryan Shaw entered for Cleveland and retired the next two batters.