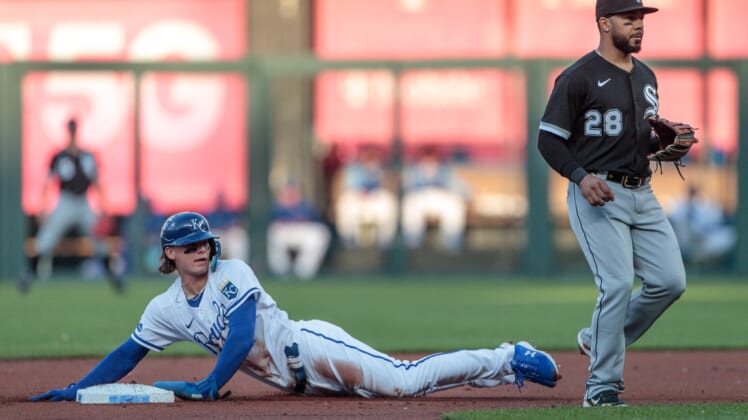 Bobby Witt Jr. and MJ Melendez hit home runs to lead the host Kansas City Royals to a 6-2 victory over the Chicago White Sox in the fourth game of a five-game series Wednesday night.

Collin Snyder (3-1) pitched a third of an inning to get the win. Reynaldo Lopez (4-1) took the loss.

Zach Greinke missed another chance for his first victory in his return to the Royals. In eight starts this season, he has allowed two runs or fewer in six of them. On Wednesday, he allowed two runs on seven hits in 5 2/3 innings, walking one and striking out four.

The Royals broke a 2-2 tie by scoring two runs in the sixth. Melendez singled with one out and scored on a triple by Emmanuel Rivera that eluded Adam Engel in right. Rivera then scored on a sacrifice fly by Kyle Isbel.

That came after Greinke failed to make it out of the sixth inning. Yasmani Grandal and Leury Garcia had runners on first and second, but with two out and Greinke’s pitch count at 100, Snider was summoned. Engel greeted him with an infield hit to load the bases, but Snider induced Andrew Vaughn to ground out to end the threat.

The Royals scored two more runs in the eight on Melendez’s second home run in as many games.

Kansas City loaded the bases against White Sox starter Lucas Giolito with two outs in the first on a single by Witt and two walks. Giolito rebounded to strike out Melendez to end the threat. inning.

The White Sox got on the board in the second. Jose Abreu led off with a double and went to third on a groundout. Garcia singled over short, driving in Abreu.

The Royals answered in the bottom of the inning. Nicky Lopez singled with two outs and stole second, and Whit Merrifield singled him in. Merrifield has a 10-game hitting streak.

Witt put the Royals up 2-1 with a solo home run leading off the third. It was his fourth home run of the season, but the first against an American League opponent.

Greinke walked Adam Engel with one out in the fifth. Engel went to third on a hit-and-run single by Vaughn and scored the tying run on a single by Tim Anderson.