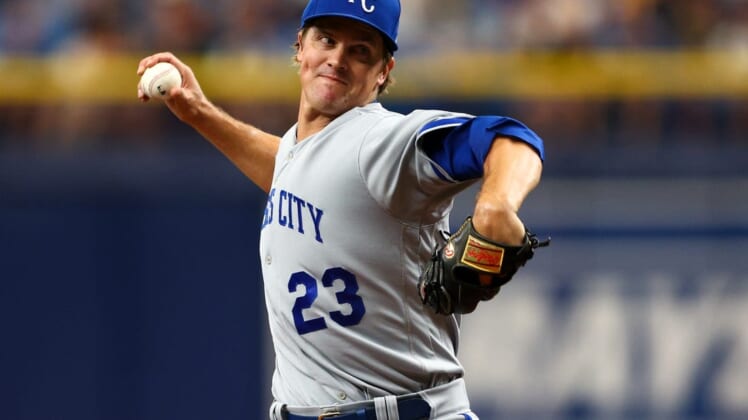 The Kansas City Royals placed right-hander Zack Greinke on the 15-day injured list on Wednesday due to forearm tightness in his pitching arm.

The move is retroactive to Sunday.

Greinke lasted just four innings before leaving with a forearm cramp during Sunday’s start against the Tampa Bay Rays. He gave up two runs and five hits before exiting.

Greinke told the club he needed to let his arm rest for a few days. But on Wednesday, he informed the Royals he wouldn’t be able to make his Saturday start, and the move was made.

Greinke won the American League Cy Young while with the Royals in 2009 as part of a seven-season stint (2004-10) with the club.

Staumont, 28, gave up four runs, three hits and three walks in 1 1/3 innings of relief while taking the loss against the Arizona Diamondbacks on Tuesday. He has struggled this season with a 6.45 ERA while compiling a 3-3 record with three saves in 42 appearances.

Misiewicz, 27, was 2-1 with a 4.05 ERA in eight appearances at Omaha after being acquired from the Seattle Mariners at the trade deadline. He made 104 relief appearances for the Mariners over the past three seasons and went 5-8 with a 4.48 ERA.