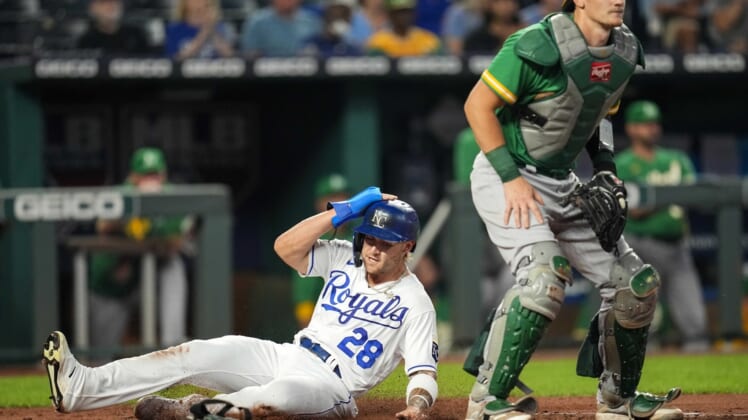 The Royals trailed 6-0 going into the bottom of the third inning.

Perez now has 109 RBIs, which leads the majors. Whit Merrifield, Nicky Lopez and Kyle Isbel each had three hits for the Royals, who earned their fourth win in five games.

Jake Brentz (5-2) picked up the win after throwing one perfect inning in relief, and Scott Barlow worked around two walks in the ninth for his 13th save.

Yusmeiro Petit (8-2) took the loss out of the Oakland bullpen, yielding four runs on four hits in one-third of an inning. The A’s (77-67) dropped their third consecutive game and fell 3 1/2 games behind the two American League wild-card leaders, the Toronto Blue Jays and New York Yankees.

Oakland added three more runs in the second off Kowar, but they could have had more. Kowar walked the first three batters of the inning and then gave up an RBI single to Elvis Andrus and a two-run single to Harrison.

Ervin Santana replaced Kowar with runners on second and third and no outs, but he wiggled out of the jam without surrendering another run.

Oakland’s Mark Canha led off the third with a double. He advanced to third and then scored on two Santana wild pitches.

Isbel led off the bottom of the third with a double, and he scored on Merrifield’s single. Merrifield came home on Perez’s single. Perez later scored on a bases-leaded fielder’s choice by Adalberto Mondesi.

Kansas City’s Hunter Dozier led off the fourth with a 426-foot home run to cut the deficit to 6-4.

Andrus drove in his second run with a two-out double in the fifth, but the Royals (66-78) came all the way back in the sixth. Isbel stroked a one-out single. After Merrifield singled him to third, Isbel scored on a single by Lopez before Perez’s three-run home run brought in Merrifield and Lopez.

Isbel hit his first career home run in the seventh, a two-run shot.