Royals look to give Brad Keller run support vs. Cardinals 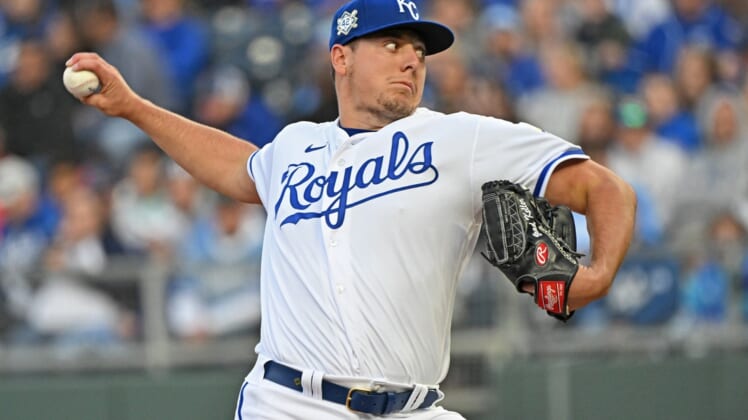 The slumping Kansas City Royals will try to revive their offense when they host the St. Louis Cardinals Tuesday.

The Royals wasted a strong pitching performance by Zack Greinke while falling 1-0 to the Cardinals Monday in their rescheduled game in St. Louis. They have scored just six runs during their four-game losing streak.

Kansas City has lost nine of 11 games — three by shutout — heading into this two-game set at Kauffman Stadium.

Royals manager Mike Matheny senses frustration mounting. Through 21 games the Royals hit .212 as a team and ranked last in the major leagues in runs scored (63).

“Yeah, I mean, they see their stats,” Matheny said. “They see our collective … our standing, where we are right now with our record. They’re not happy with it, either. We’ve got a number of guys that aren’t swinging how they want to swing it, and they all take a lot of pride in that they want to help get this thing rolling, ‘do my piece.’ That’s what we’re preaching: Just do your part and hand it off to the next guy.”

Royals starting pitcher Brad Keller (0-2, 2.19 ERA) has suffered from poor run support this season. His teammates have scored just three times for him in his 24 2/3 innings.

Keller allowed just one run on three hits in seven innings in his last start, a game the Royals eventually won 5-2 over the Chicago White Sox in 10 innings.

In that game Keller induced 12 groundouts and completed each of his seven innings in 15 pitches or less.

“That was complete-game stuff,” Matheny said after that game. “We give him a little bit more offense, and he’s finishing that game.”

Keller is 1-4 with a 4.99 ERA in seven career appearances against the Cardinals, including five starts.

Cardinals starting pitcher Dakota Hudson (2-1, 2.75 ERA) is also coming off a strong performance. He held the Arizona Diamondbacks to one hit in six scoreless innings on April 28. Prior to that, he held the Cincinnati Reds scoreless on two hits in 6 2/3 innings.

The Royals roughed up Hudson earlier this season, though, getting a two-run homer by Michael A. Taylor and a solo shot from Salvador Perez on April 12. The Cardinals ultimately won that game 6-5.

Overall Hudson is 1-0 with a 3.24 ERA in four career appearances against the Royals, including three starts.

The Cardinals have won two games in a row and four of their last six. But they have scored two or fewer runs in six of their last nine games.

“The pitching has been picking us up. Hopefully we’ll play well on this road trip and going forward.”