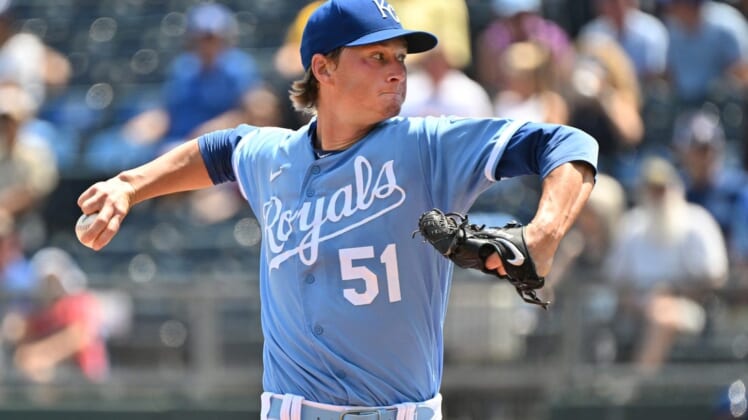 Singer (6-4) struck out seven and walked three in helping the Royals avoid a three-game sweep. The Dodgers were shut out for the fifth time this season and their two hits matched a season low.

Pasquantino finished with three hits and two runs, and his solo shot in the eighth inning iced the win. He has a six-game hitting streak, and is hitting .455 with four homers, a double, six runs and six RBIs along the way.

Salvador Perez hit an RBI double in the first inning and Pasquantino singled home a run in the third. Pasquantino doubled in the sixth and scored on Kyle Isbel’s single to right field as the Royals extended their lead to 3-0.

Kansas City left-hander Amir Garrett came on to start the seventh and walked the first batter on five pitches before striking out Trayce Thompson, Chris Taylor and Cody Bellinger.

In the eighth, Royals right-hander Dylan Coleman allowed a double to Mookie Betts with one out. Coleman should have been out of the inning when Freddie Freeman reached on an error by Bobby Witt Jr. at short with two outs to prolong the inning.

Instead, right-hander Scott Barlow came on to strike out Max Muncy to end the threat, and then he breezed through the ninth, including two more strikeouts, for his 19th save.

The Royals finished with eight hits, including two from Michael Taylor.

The Dodgers’ first hit was a single by Chris Taylor in the fifth inning, and it followed a leadoff walk to Joey Gallo. Singer got Bellinger to fly out, struck out Tony Wolters and induced Betts to foul out to first.

In two of his previous three starts, Singer shut out the Yankees in New York on one hit over seven innings with 10 strikeouts, and surrendered one run on five hits in 7 1/3 innings against the visiting White Sox.

Dodgers left-hander Tyler Anderson (13-2), a first-time All-Star this season, gave up three runs on seven hits in six innings. He walked one and fanned four in taking his first loss since June 27.