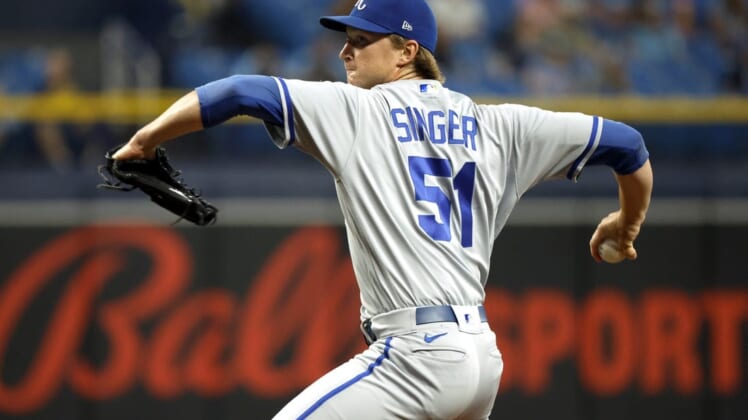 Michael Massey’s sacrifice fly in the 10th inning lifted the Kansas City Royals to a 3-2 victory over the Tampa Bay Rays on Friday night in St. Petersburg, Fla.

Tampa Bay’s Roman Quinn started as the automatic runner in the bottom of the 10th, but he was caught trying to steal third by catcher Salvador Perez for the second out. Left fielder MJ Melendez then made a diving catch of Francisco Mejia’s shallow fly for the win.

Bobby Witt Jr. stroked a two-run homer, and Melendez had a single, run, walk and was hit by a pitch as the Royals broke a four-game skid despite notching just four hits.

After dominating the Rays last month in Kansas City, Brady Singer was solid through six innings. He tossed five scoreless before being touched for two runs in the sixth. He finished that inning, allowing five hits with four walks and seven strikeouts.

The Rays’ Harold Ramirez was 2-for-4 with a double and a run, and Randy Arozarena posted a single, two RBIs and a stolen base.

Jalen Beeks (2-3) lost for the second time in three days, both in extra innings.

Singer, who spun five no-hit innings and fanned a career-high 12 Rays in a no-decision on July 23, wasn’t as sharp early the second time around against them. He issued three walks in the first two innings but was able to extricate himself from any damage.

McClanahan issued a two-out walk to Melendez in the third, and then delivered a slider that didn’t do much over the middle of the plate. Witt crushed it out to center fielder at 110.3 mph for his 16th homer, disappearing down a deep walkway 438 feet later for a two-run lead.

In the sixth, a single by David Peralta and a double by Ramirez put the set up the Rays. Following a strikeout, Arozarena evened the score by grounding a two-run single to right, giving him 17 RBIs in his past 13 games.