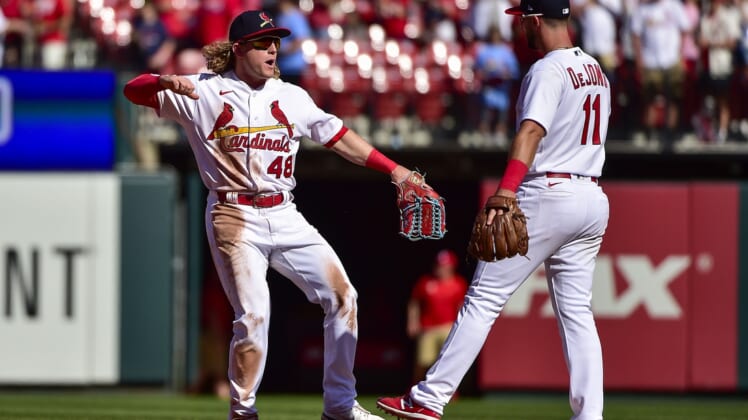 The 125th meeting between Missouri rivals St. Louis Cardinals and Kansas City Royals is scheduled to take place Monday at St. Louis in a makeup game from an April 13 rainout.

The series will then shift to Kansas City for two more games Tuesday and Wednesday.

The Cardinals, who lead the series 74-50 after a 6-5 win at home April 12, announced Sunday that the start time for Monday’s game at Busch Stadium was changed to 12:15 p.m. CST due to the weather forecast.

The initially scheduled start time was 3:15 p.m. but the National Weather Service in St. Louis was forecasting thunderstorms for Monday afternoon and Monday evening.

The teams originally had a scheduled break in the schedule Monday before beginning a two-game set at Kauffman Stadium in Kansas City on Tuesday night.

Kansas City is coming off being swept in a three-game series at home against the New York Yankees.

The Royals have lost eight of their last 10 games.

“We’re a homegrown team with limited funds facing a financial juggernaut (Yankees) armed with Aaron Judges and it’s not right,” said Kansas City manager Mike Matheny, who was the Cardinals’ manager from 2012 to 2018. “Maybe we need a salary cap so teams like ours can compete.”

St. Louis split a four-game series at home with the Arizona Diamondbacks over the weekend.

Nolan Arenado returned from his one-game suspension and hit his sixth home run of the season as part of a four-run rally in the seventh inning of the Cardinals’ 7-5 win Sunday. Arenado was hitless in his first three at-bats before the home run. He was suspended for his part in a bench-clearing brawl with the New York Mets last week.

Harrison Bader hit his first home run of the season as part of the rally before Arenado’s home run. He had a curtain call from the fans.

“I was fortunate to be put in a position to deliver for my team and it was a good win for us,” said Bader, whose home run gave the Cardinals a 6-5 lead. “You just try to put a good at-bat together for the team.”

Matz has pitched one game in his career against Kansas City — a 5-1 win last season when he was with the Toronto Blue Jays. He had a no-hitter into the sixth inning and won the game allowing just two hits and one earned run in six innings.

Royals catcher Cam Gallagher suffered a strained hamstring in Kansas City’s 6-4 loss to the Yankees and was placed on the disabled list. He was put on the injured list and M.J. Melendez will be called up from Triple-A Omaha to replace him.