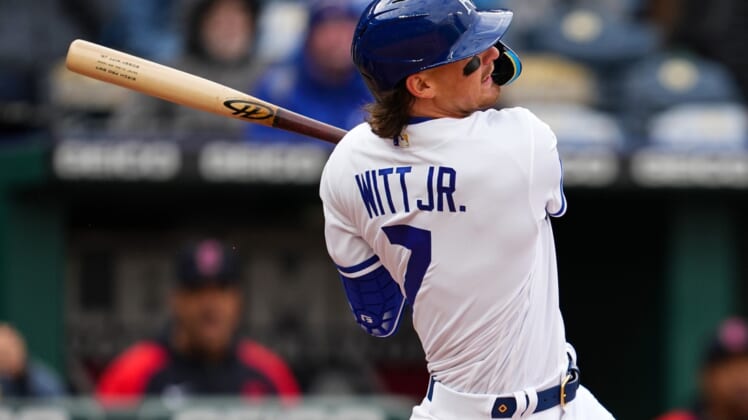 If Bobby Witt Jr. becomes the superstar many expect him to be, he’ll still have trouble matching the excitement of his Major League Baseball debut.

Witt and his Kansas City Royals teammates will host the Cleveland Guardians Saturday afternoon in the second game of a four-game series after claiming the season-opener 3-1. Witt recorded his first career hit and RBI on a two-out double in the eighth inning that gave the Royals a 2-1 lead. He then scored an insurance run to cap the scoring.

“I don’t know if anyone could predict anything (like) that,” the rookie infielder said. “I just wanted to help the team in any way I could. That’s what I wanted to do. I got a situation where I was able to.”

Much is expected from the second overall pick in the 2019 draft, but expectations rarely fit reality. Witt proved that he’s up to the challenge, at least in his first opportunity.

“You couldn’t have scripted that any better,” Royals manager Mike Matheny said of Witt’s clutch hit. “This isn’t one he’s going to forget, and I probably won’t, either.”

Now Witt and the Royals will settle into the 162-game grind. The next order of business is trying to get former ace Brad Keller back on track. Keller struggled for most of 2021 (8-12, 5.39 ERA). He gave up 16 earned runs in 12 innings combined in his first four starts.

He eventually found some rhythm, and his finishing ERA of 5.39 was his lowest of the season. He allowed just five earned runs in his final three starts, covering 17 innings with 19 strikeouts and only seven walks. He was shut down after Aug. 26 with a right lat strain. He’s ready for a fresh start.

“Fastball command is a big thing, going after guys,” he said at the end of spring training. “Last season I felt like I fell behind guys all season. That’s a big emphasis for me this season.”

Cleveland will counter with Zach Plesac, who also had some struggles in 2021 10-6, 4.67 ERA). He missed a month and a half after suffering a thumb fracture when he “aggressively” ripped off his jersey following a rough outing in late May.

He made 15 starts after his injury, and he allowed at least two runs in 14 of them. Now he has to focus on rebounding from a career-worst 4.67 ERA.

He seems to only be looking forward.

“The last thing for me is fastball command,” he said, agreeing with his Saturday counterpart, Keller. “It’s really executing when I need to. All my off-speed pitches (are about getting) swings and misses or weak contact.”

After the loss on Opening Day, manager Terry Francona is focused on the long haul, beginning with Saturday’s game.

“It is about wins and losses,” Francona said after Thursday’s game. “We made a couple mistakes, but we played hard and we’ll come back again … and see if we can do a little better.”