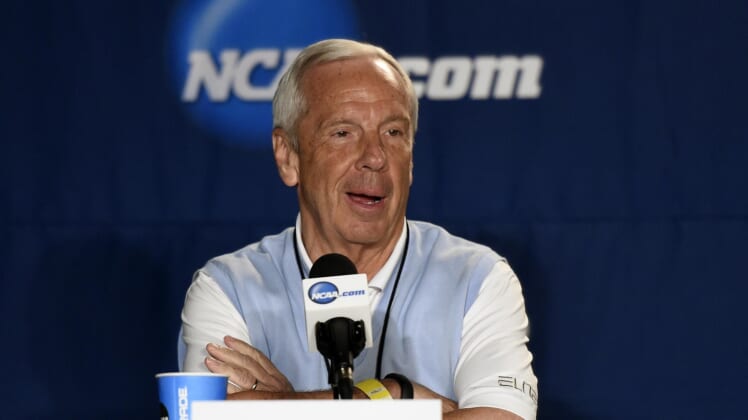 North Carolina men’s basketball head coach Roy Williams wore a suit jacket Sunday to his Elite Eight game against Kentucky that caused a bit of an uproar on social media.

Here’s a look at the plaid wonder from behind as Williams spent a moment chatting with John Calipari before the game. A “caption this” contest might be in order.

Roy Williams pulled out his sports coat from his 1970's closet.

It is a bit of a throwback, that’s for sure. Here’s what some people had to say about the picnic tablecloth…er, suit jacket Williams sported.

Do not adjust your set. That is, in fact, Roy Williams' jacket. #GoHeels

I'd buy a used vehicle from Roy Williams no doubt

Roy Williams should have an endorsement for https://t.co/58SFop25Fc. Sheesh!

Of course, not everyone hated the jacket.

I'd preach in that jacket Roy Williams is wearing! #UNCvsUK

With two NCAA Tournament wins as a coach, Williams can wear whatever he wants, as far as we’re concerned. Still, he did make quite an impression with his style sense on Sunday.