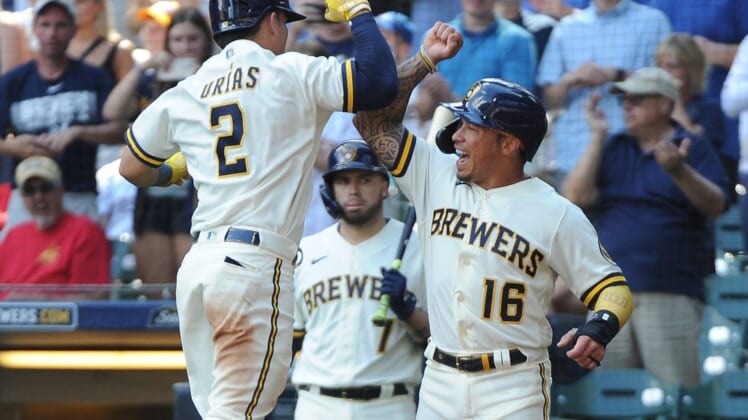 Rowdy Tellez had two home runs and six RBIs to lead the Milwaukee Brewers to a 10-4 win over the visiting Minnesota Twins on Wednesday afternoon.

Luis Urias also homered and had two RBIs for Milwaukee, which completed a two-game sweep over Minnesota and won for the fifth time in its past six games. Christian Yelich and Willy Adames finished with one RBI apiece.

Jose Miranda and Kyle Garlick homered in a losing effort for the Twins, who have dropped nine of their last 14 games.

Brewers right-hander Corbin Burnes (8-4) gave up three runs on five hits in six innings. He walked none and struck out 11.

Milwaukee opened the scoring with three runs in the first. Yelich drew a leadoff walk, Adames singled to right-center field and Tellez ripped a three-run shot to center field.

The Twins pulled even at 3-3 in the second. Miranda led off the inning with a homer, his ninth, and Nick Gordon and Gary Sanchez followed up with a pair of run-scoring hits.

The Brewers surged to an 8-3 advantage thanks to a five-run inning in the fourth.

Yelich drew a bases-loaded walk for the go-ahead run, and Adames followed with a sacrifice fly to left field to make it 5-3. Tellez then delivered his second homer of the game and 20th of the season with a three-run blast to center field.

Another Brewers homer, this time by Urias, increased Milwaukee’s lead to 10-3 in the fifth. Kolten Wong hit a one-out double and came home to score on Urias’ two-run shot, which marked his 12th homer of the season.

The Twins finished the scoring on Garlick’s solo shot in the seventh. His blast to left field marked his eighth homer of the season, adding to his career high.

Both teams will be off Thursday before starting new series on Friday. The Twins will travel to San Diego for a three-game set with the Padres, and the Brewers will visit the Boston Red Sox for the next three games.