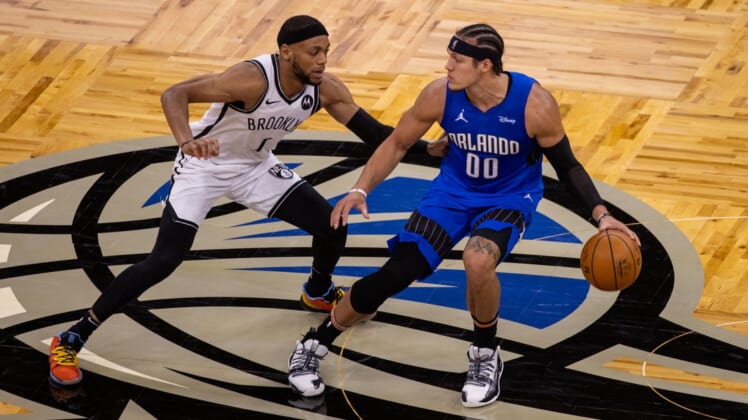 Aaron Gordon scored a season-high 38 points and the host Orlando Magic broke a nine-game losing streak with a 121-113 victory over the Brooklyn Nets on Friday night.

Brooklyn’s Kyrie Irving returned after missing one game with a sore groin and scored a season-high 43 points.

CJ McCollum scored 32 points and Damian Lillard added 31 as host Portland opened a two-game set against Dallas with its seventh win in the past nine games.

Billed as a duel of superstars, Lillard got help from McCollum to earn the victory over the Mavericks and Luka Doncic, who scored 38 points. Portland’s Terry Stotts earned his 500th career victory as an NBA head coach.

Doncic added nine rebounds and nine assists for the Mavericks while Tim Hardaway had 25 points and Maxi Kleber added 16.

Mikal Bridges added 17 points and Devin Booker scored 16 as the Suns won for the 19th time in the past 24 games.

Karl-Anthony Towns recorded 24 points and nine rebounds and Ricky Rubio contributed 21 points and 10 assists for Minnesota. Anthony Edwards had 11 points and 10 rebounds one night after becoming the third-youngest player in NBA history to score 40 or more points.

Saddiq Bey had 20 points and six rebounds while Jerami Grant contributed 18 points as the Pistons won in back-to-back outings for just the second time this season.

John Wall put up 21 points and seven rebounds for the Rockets. Victor Oladipo finished with 19 points and Christian Wood had 18 points and 11 rebounds.

Donovan Mitchell scored 31 points, including a go-ahead pull-up jumper with 29.1 seconds left, to lead Utah to a victory over Toronto in Tampa.

Mitchell eight points in an 8-0 run that put Utah up 113-110 with 12.4 seconds left. Pascal Siakam barely missed a 3-point attempt at the buzzer that would have forced overtime.

Joe Ingles added 19 points and Mike Conley chipped in 15 for the Jazz, and Rudy Gobert tallied 15 points and 16 rebounds while playing with a hip contusion. Siakam had 27 points and nine assists to lead the Raptors.

Keldon Johnson collected 23 points and a career-high 21 rebounds to lift visiting San Antonio to a victory over Cleveland.

Johnson recorded 11 offensive boards to highlight his sixth double-double of the season for the Spurs. Dejounte Murray had 22 points and DeMar DeRozan added 20 in his return from a four-game absence following the death of his father.

Collin Sexton scored 16 of his 29 points in the second half and Darius Garland also had 29 points for the Cavaliers, who have lost five of their past six games.

De’Aaron Fox led all scorers with 29 points, and visiting Sacramento held Boston to 42.9 percent shooting from the floor en route to a win.

Buddy Hield finished with 22 points and Richaun Holmes was one of two Kings to record a double-double, posting 25 points and 11 rebounds. Harrison Barnes added 15 points and a game-high 13 rebounds.

Jayson Tatum finished with 15 points for Boston, more than 10 below his season average. Kemba Walker scored 16 points and passed for seven assists while Daniel Theis had 14 points and eight rebounds.

Malcolm Brogdon was Indiana’s scoring star with a game-high 27 points on 10-for-12 shooting, including 7-of-9 on 3-pointers. The point total was a season high for the Pacers.

Miami, which lost consecutive games for the first time since a three-game skid from Feb. 13-17, was led by Bam Adebayo, who had 20 points, eight rebounds and five assists. The Heat also got 17 points from Jimmy Butler, 16 by Dragic and 15 from Tyler Herro.

Jamal Murray scored 22 of his 34 points after the third quarter, including a last-second 3-pointer to send the game to overtime, and host Denver rallied to beat Chicago.

Nikola Jokic also had 34 points to go with 15 rebounds and nine assists. Michael Porter Jr. scored 19 points and Will Barton had 16 for the Nuggets.

Andrew Wiggins exploded for a season-best 40 points and Jordan Poole, subbing for injured Stephen Curry, scored 25, lifting short-handed Golden State to a victory over host Memphis in the opener of a two-day, two-game series.

Wiggins’ 40-point game was the ninth of his career, with the previous eight all having come while he was with the Minnesota Timberwolves.

Ja Morant and Grayson Allen had 14 points apiece for Memphis, which lost for the fourth time in the past five games.