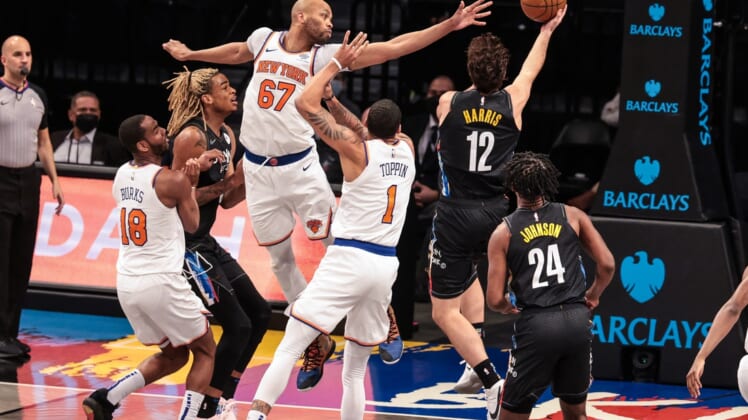 Kyrie Irving scored 40 points, including a critical 3-pointer in the final minute, and Jeff Green made a pair of free throws with 3.7 seconds left to seal the host Brooklyn Nets’ 114-112 comeback win over the New York Knicks on Monday.

The Nets, playing the second leg of a back-to-back, carried over some of the struggles from their 115-107 loss Sunday in Chicago. Brooklyn fell behind by 10 points at halftime and lost James Harden after just four minutes due to hamstring tightness.

Green finished with 23 points for the Nets, who hold a half-game lead over the Philadelphia 76ers for first place in the Eastern Conference. Harris scored 16 points and grabbed a team-high eight rebounds, and Alize Johnson added 12 points and seven rebounds off the bench.

Julius Randle recorded a triple-double with 19 points, 15 rebounds and 12 assists for the Knicks. RJ Barrett shot 4 of 6 from 3-point range en route to a team-high 22 points.

Doncic shot 6 of 11 from 3-point range to help the Mavericks pull away. Dorian Finney-Smith added 23 points and Jalen Brunson chipped in 20 off the bench. Josh Richardson added 17 while making all five of his shots from 3-point range.

Booker sank four free throws in the final 37.8 seconds left and picked off a Jae’Sean Tate pass to seal the win. Booker finished 6 of 8 from 3-point range and added six rebounds and six assists. Ayton finished with 27 points and 11 rebounds, and Paul had 19 points and 11 assists.

Gary Trent Jr. drained a 3-pointer as time expired to lift Toronto over Washington in Tampa.

Pascal Siakam scored 18 of his 22 points in the first half and rookie Malachi Flynn joined Trent with 16 points for Toronto, which overcame a 19-point deficit. The Raptors also have won nine straight regular-season meetings against the Wizards.

Washington’s Russell Westbrook collected 23 points, 14 rebounds and 11 assists to record his NBA-best 19th triple double and ninth in his past 13 games. Garrison Mathews scored all 17 of his points in the first half and Davis Bertans also finished with 17 points.

Russell came off the bench and played 24 minutes after missing 26 games. He scored 13 points in the fourth quarter to help Minnesota pull away. Karl-Anthony Towns finished with 23 points and 13 rebounds, and Anthony Edwards contributed 19 points and eight rebounds for the Timberwolves.

De’Aaron Fox led the Kings with game highs of 31 points and nine assists, but he couldn’t prevent his team from taking its fourth consecutive defeat. Harrison Barnes finished with 21 points and 12 rebounds for Sacramento while Buddy Hield had 18 points and seven rebounds.

Cleveland came into the contest averaging just 90.8 points per outing over its five-game losing skid and only 102.7 points per game for the season, the worst in the NBA. The Cavaliers exceeded those figures late in the third quarter and then in the first minute of the fourth, respectively, and then built their advantage to as many as 32 points down the stretch.

Isaiah Hartenstein added 16 points and 12 rebounds for Cleveland. DeMar DeRozan led the Spurs with 20 points while Keldon Johnson had 13 points and 10 rebounds.

Jerami Grant scored 21 points and six of his teammates also reached double figures as Detroit handled host Oklahoma City. The Pistons earned a bounce-back win after a 44-point loss to the Knicks on Saturday.

Josh Jackson and Sekou Doumbouya contributed 14 each points each for the Pistons, who have won three of their past five and were opening a five-game road trip. The Pistons shot 51.6 percent from the floor while hitting a season-high 49 field goals.

The Thunder were led by 19 points from rookie Aleksej Pokusevski. Oklahoma City player shot a season-worst 18.5 percent from behind the arc (5 of 27) while losing its third in a row and falling for the sixth time in seven games.