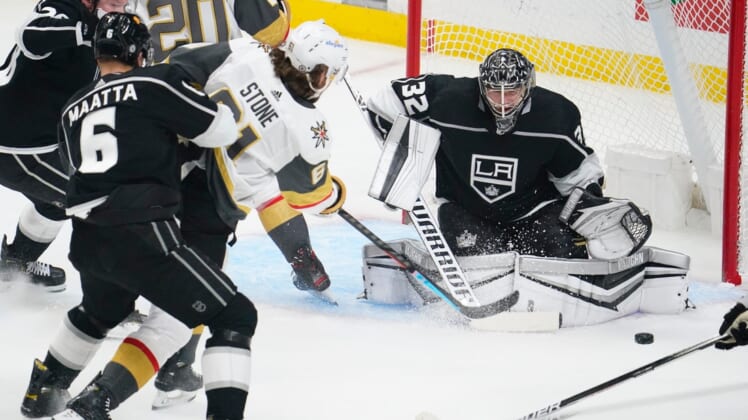 Max Pacioretty scored two goals and Robin Lehner made 23 saves as the visiting Vegas Golden Knights extended their winning streak to five games with a 4-2 victory over the Los Angeles Kings on Friday night.

It was Pacioretty’s fourth two-goal game of the season and the 52nd of his career. William Karlsson and William Carrier also scored goals for Vegas, which increased its West Division lead to five points over the idle Colorado Avalanche.

Alec Martinez added two assists for the Golden Knights, who improved to 11-2-0 over their past 13 games. Mark Stone also had an assist to extend his point streak to a team-record 10 games. Lehner made his first start in goal since Feb. 7 after being sidelined with a concussion.

Alex Iafallo and Trevor Moore scored goals for Los Angeles, which fell to 0-3-0 against the Golden Knights this season. Jonathan Quick, making his first start after missing five games with a lower-body injury, had 29 saves.

Alex Ovechkin scored twice late in the third period, giving him goals in his past five games, as host Washington rallied to defeat New York.

The victory extended Washington’s winning streak to seven games — all of which have come without Tom Wilson, who had been suspended and will be eligible to come back for the next game. Washington goalie Vitek Vanecek continued his strong rookie season with 32 saves.

New York took a 1-0 lead 16:42 into the game when Artemi Panarin beat Vanecek on a shot from the left circle. Goalie Alexandar Georgiev finished with 16 saves.

J.T. Miller scored in overtime to give Vancouver the road win over Montreal and its fourth straight victory overall.

Thatcher Demko continued his red-hot play by stopping 29 of 31 shots for the Canucks. Demko is 8-1-0 with a .949 save percentage over his past nine games. Adam Gaudette and Nils Hoglander each scored for the Canucks.

Corey Perry and Nick Suzuki scored goals for the Canadiens, and Jake Allen made 28 saves.

Mark Giordano scored a tiebreaking, power-play goal in the second period and Calgary defeated host Toronto in the opener of a two-game set.

Jason Spezza, Alexander Kerfoot and Mitchell Marner scored for the Maple Leafs, and Frederik Andersen stopped 14 shots. Toronto lost for the sixth time in the past seven games.

The Blues snapped their five-game winless streak (0-3-2) while improving to 4-1-2 against the Sharks this season.

Tyler Bozak scored for the Blues on his 35th birthday. Brayden Schenn and Vladimir Tarasenko scored in the shootout to clinch the victory. Ryan Donato scored and Martin Jones made 33 saves for the Sharks, who are 0-2-1 in their past three games.