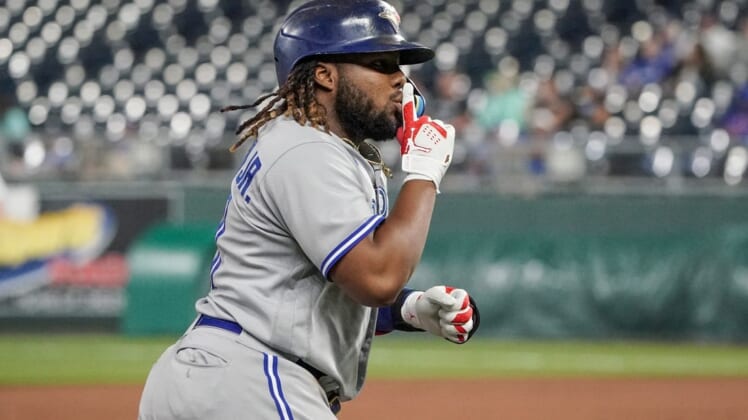 The start of the game was delayed 2 hours, 5 minutes due to the weather, even though there was only a light rain. Heavy thunderstorms were predicted.

The Royals managed just two hits in the game, both by Michael A. Taylor.

Ross Stripling (2-1) picked up the win. He matched his season high by tossing five innings, and he allowed just one hit and no walks while striking out two. He faced one batter over the minimum.

Stripling pitched more than four innings for just the second time this season. The 32-year-old right-hander, who made his sixth start, has been used out of the bullpen eight times.

Daniel Lynch (2-5) took the loss after giving up six runs on six hits in 5 2/3 innings. He walked two and struck out four. The long ball hurt him, as five of the six runs he yielded came on homers.

Both starting pitchers cruised early. The first baserunner came with one out in the bottom of the third inning when Taylor singled.

Toronto didn’t have a baserunner until George Springer walked leading off the fourth. He came around to score when Bichette lined a home run to right-center.

The Blue Jays got another run when Danny Jansen hit a sacrifice fly to center in the fifth inning, scoring Matt Chapman, who had doubled.

Guerrero hit a line drive that carried 423 feet over the fence in right-center, giving Toronto a 4-0 lead in the sixth. After Alejandro Kirk singled, Espinal ended Lynch’s night with a home run that landed in the Toronto bullpen in left field.

The Blue Jays added an unearned run in the seventh on an RBI single by Teoscar Hernandez.

The Blue Jays scored their eighth run in the eighth on a wild pitch.

Espinal, Chapman and Lourdes Gurriel Jr. each had two of Toronto’s 10 hits.