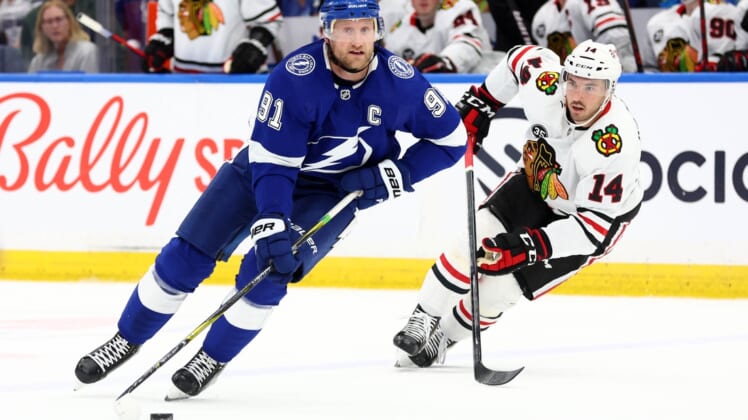 Tampa Bay’s Ross Colton scored twice in a three-point night, including the go-ahead tally, as the Lightning won their fourth straight game by beating the visiting Chicago Blackhawks 5-2 on Friday night.

Steven Stamkos and Brayden Point each added a goal and an assist. Nikita Kucherov and Nick Paul each assisted on two markers.

The club’s Jon Cooper, who made his Lightning head coaching debut on March 29, 2013, became the 49th NHL bench boss to lead his 700th game.

The visitors got goals from Calvin de Haan and Alex DeBrincat. Workhorse goalie Kevin Lankinen made 38 saves for Chicago, which lost its fourth straight game (0-3-1) and is 3-6-3 in the second of back-to-back tilts.

In his return to his old arena, Tyler Johnson — a Lightning member from 2012 to 2021 — was honored by the franchise with a video tribute on the stadium video board.

In their first of 11 April home games, the Lightning peppered Lankinen with nine shots in the first five minutes before Stamkos capitalized.

After a strong first power play, they went up 1-0 at 6:11 when Kucherov fed a pass into the slot to Point, who backhanded a pass that Stamkos one-timed for his team-leading 31st goal.

Blanked 4-0 by the Panthers in Florida on Thursday, Chicago got on the board at 12:11 when de Haan’s long snap shot found its way in for the defenseman’s third goal.

On Chicago’s second man advantage, DeBrincat squared the match at 2-all with his 39th goal by tallying from the low slot at 17:21.

In the second, Colton broke the tie with a rebound to put Tampa Bay up at 6:12. Six minutes later, he netted his 14th on a blind, between-the-legs pass from Paul for a 4-2 lead.

Vasilevskiy (35-14-4) denied three shots in the third to raise his spotless career mark to 13-0-0 against the Blackhawks.