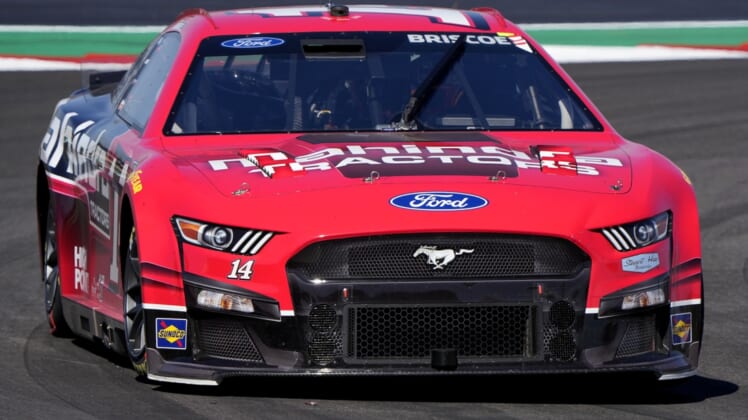 Starting second on the final restart, Chastain muscled his way past race leader Tyler Reddick, was passed by A.J. Allmendinger after the white flag and returned the favor by tapping and getting Allmendinger out of shape.

Alex Bowman, who dive-bombed his way to the lead, was then hit by Allmendinger, and the Alva, Fla., native raced away to his first victory in his Chevrolet as the two cars in front of him slid off the course.

Polesitter Ryan Blaney led the 39-car field to the green flag in the 68-lap race — NASCAR’s second consecutive visit to the facility.

However, second-place starter Daniel Suarez had no desire to run beside Blaney and quickly took the lead during the first circuit around the 20-turn, 3.426-mile road course.

Suarez soon built a one-second lead in the race’s first stage, which was run without a caution. He breezed to a 1.91-second win over Blaney to claim the second stage win of his Cup career.

Austin Cindric gained the lead and gridded a second ahead of second-place Chastain. Meanwhile, Allmendinger — a two-time road-course winner in the series — advanced to third.

On a restart with 22 laps to go, Chase Briscoe and Chastain fought back and forth as the top two cars with Allmendinger in third.

Chastain emerged with the lead, but the field was slowed when Ricky Stenhouse Jr.’s car broke its drive shaft and stalled on the backstretch for the sixth caution with 15 to go.

A wreck involving Joey Logano, Kyle Larson and Kurt Busch brought out the ninth caution — with Reddick passing Chastain on the inside before the yellow flag flew — to set up the dash to the end.