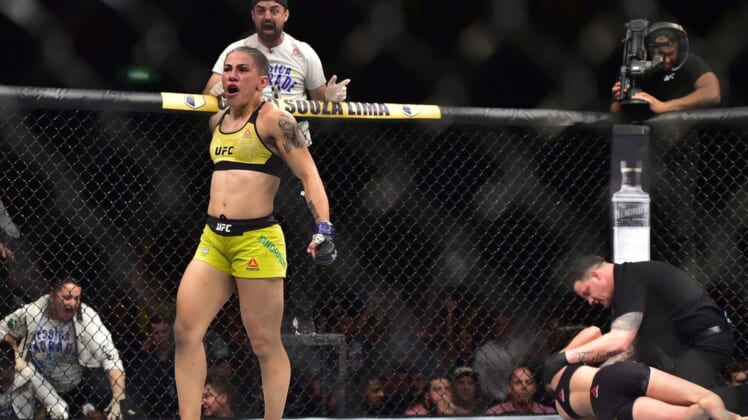 UFC fighter Rose Namajunas said her comments ahead of an April 24 bout with champion Zhang Weili were not personal, while standing behind her anti-communism position in the process.

The fighters are scheduled to meet at UFC 261 in a strawweight fight. Namajunas is Lithuanian and said she was inspired by her country’s independence since the fall of the Soviet Union.

Zhang is the only UFC champion from China and was also the first from her country to win a belt.

Namajunas, 28, was recently quoted by an outlet in her home country stating that the documentary on the 1992 national basketball team going to the Olympics as an independent has inspired and motivated her career.

She said the film was a reminder that “it’s better dead than red,” a phrase common during the Cold War. She said Zhang is “red” and fighting for freedom is a “huge motivating factor.”

“If you’re confused about any of my opinions, you can watch the documentary and you could get a good idea as to what my family had to go through, the reason I’m in the United States today, the reason that I do mixed martial arts, all of that stuff,” Namajunas said.

She elaborated on her remarks on The MMA Show, which aired Wednesday.

“I’d probably have a really different life if it wasn’t for everything in that documentary, how Lithuanians had to struggle with communism oppression,” she said. “The reason that I brought it up and that I referenced it is because the reporter suggested I had animosity toward past opponents, and that’s what maybe caused some motivation in those fights, and in this one there’s no animosity so maybe there’s a lack of motivation. But that couldn’t be further from the truth.”

Namajunas said she identifies all of her opponents as “red” and roadblocks to her freedom and success.

“I love Weili. I don’t know her,” she said. “I know she wants to be friends and all that stuff. It would be great to get to know her, if we could, if it’s possible.”