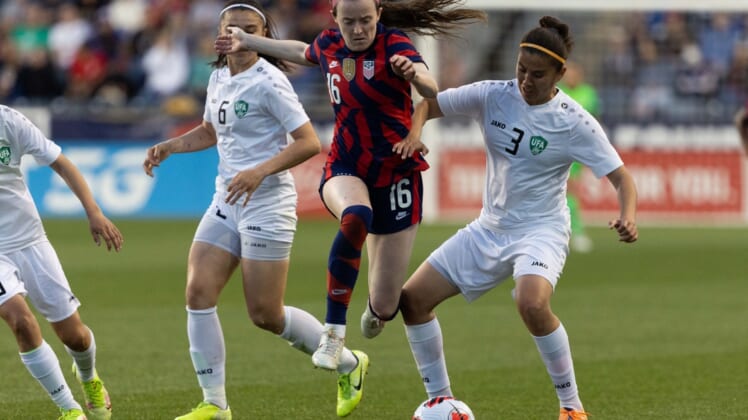 Rose Lavelle and Catarina Macario each had two goals and an assist in the first half as the U.S. women’s national team routed Uzbekistan 9-0 in a friendly Tuesday in Chester, Pa.

Even with the youngest starting lineup (24.98 years) since Jan. 30, 2007, the Americans rolled to a 6-0 halftime lead, beginning with an own goal by Uzbekistan’s Kamila Zaripova 25 seconds into the match.

The other U.S. goal in the opening half was by Mallory Pugh in the 14th minute.

The outcome was never going to be in doubt when the world’s top-rated team played No. 48, especially coming off the Americans’ 9-1 thrashing of Uzbekistan in Columbus, Ohio, on Saturday.

If there was one question going into the match, it would be how the U.S. would respond to having its 17-match home shutout streak end when Uzbekistan tallied in the 70th minute Saturday.

But 30-year-old goalkeeper Aubrey Kingsbury had an easy night in her U.S debut as the Americans outshot the visitors 38-0 with 15 shots on goal.

The match was another tune-up for the U.S. before it begins the qualifying tournament this summer for the 2023 World Cup hosted by Australia and New Zealand.

Leading to the qualifiers, U.S. coach Vlatko Andonovski fielded a lineup that did not include a player with at least one player with 100-plus international appearances, or caps, since March 2013. The team averaged just 21 per woman, including the debuts of Kingsbury and defender Naomi Girma.

After the own goal, Macario made it 2-0 in the 12th with a free kick off the right post, Pugh followed two minutes later with a score and Lavelle added scores in the 25th and 27th minutes before Macario extended the lead to 6-0 in stoppage time.