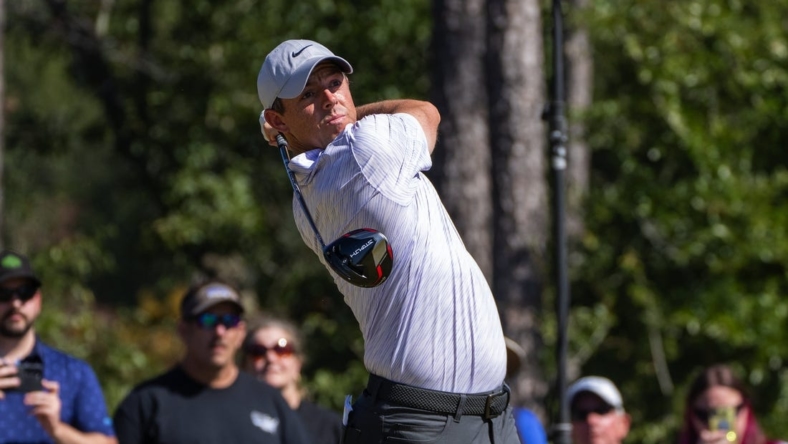 World No. 1 Rory McIlroy says the feud between the PGA Tour and the rebel LIV Golf Series “has gotten way out of control already.”

The Northern Irishman said in an interview this week with The Guardian that he hopes both sides can ultimately make peace in “this ‘us versus them’ thing.”

“If the two entities keep doubling down in both directions, it is only going to become irreparable,” McIlroy said. “We are going to have a fractured sport for a long time. That is no good for anyone.”

McIlroy, 33, ascended to the top of the world rankings for the first time since July 2020 following his title defense on Sunday at The CJ Cup in South Carolina.

McIlroy discussed his feelings about some of the players — and friends — who have joined LIV Golf and endangered their Ryder Cup eligibility, including Sergio Garcia, Graeme McDowell, Lee Westwood and Ian Poulter.

“It’s a weird thing,” McIlroy said. “I think it is the first time in my life that I have felt betrayal, in a way. It’s an unfamiliar feeling to me. You build bonds with these people through Ryder Cups and other things. Them knowing that what they are about to do is going to jeopardize them from being a part of that ever again? There was a great opportunity for GMac to maybe be the captain at Adare in 2027. Most of Sergio’s legacy is Ryder Cup-based, same with Poulter, Westwood.

“I would like to think the Ryder Cup means as much to them as it does to me. Maybe it does. But knowing what the consequences could be, I just could never make that decision. OK, it might not be 100 percent certain but that it could be the outcome? It just isn’t a move I would be willing to make. I thought they felt the same way.

“I feel like the place where they have been able to build their legacy and build their brand, they have just left behind. You could make the same argument about me, I started in Europe and went to America but I have always been supportive of the traditional system. If people felt so aggrieved about some things, I’d rather be trying to make those changes from inside the walls than trying to go outside and be disruptive.”

“A betrayal? We can still qualify for the team as far as I’m aware. Unless we’ve been told we can’t qualify, then I’m still ready to play as much as I possibly can and try and make that team,” Poulter said. “My commitment to the Ryder Cup I think goes before me. I don’t think that should ever come in question. I’ve always wanted to play Ryder Cups and have played with as much passion as anyone else that I’ve ever seen play a Ryder Cup.

“I don’t know where that comment really has come from, to be honest.”

The 2023 Ryder Cup begins next September outside of Rome, Italy.

The U.S. Ryder Cup team has ruled that American players must be members of the PGA Tour. The Europeans have not gone that far yet, although LIV Golf member Henrik Stenson was stripped of his Ryder Cup captaincy in July.

McIlroy did not hide his displeasure with LIV Golf front man Greg Norman, whose circuit is backed financially by the Saudi government.

“He has basically found people to fund his vendetta against the PGA Tour,” McIlroy said. “I think he hides behind ‘force for good’ and all that stuff … this has been his dream for 30 years and he has finally found people who can fund that dream.”