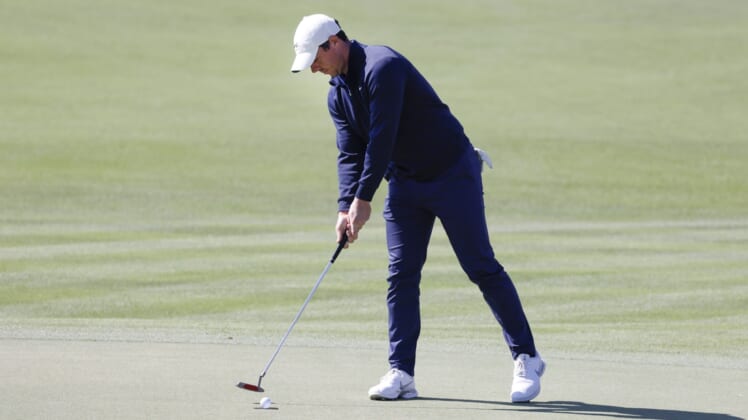 Northern Ireland’s Rory McIlroy shot a 6-under-par 66 on Thursday and was tied for the lead with Canada’s Corey Conners after the opening round of the Arnold Palmer Invitational at Bay Hill Club & Lodge in Orlando.

Long drive sensation Bryson DeChambeau was alone in third place at 5 under, while Jason Kokrak, South Korea’s Byeong Hun An and Columbia’s Sebastian Munoz were tied for fourth place at 4 under.

McIlroy’s last victory was at the WGC-HSBC Championships in China. He last won on U.S. soil at the Tour Championship at Atlanta in August of 2019.

The 2018 Arnold Palmer Invitational champion, who last won on the PGA Tour in 2019, opened his round on the back nine, shooting 1-under before the turn. McIlroy then got on a roll with five consecutive birdies starting at No. 2.

“I feel like you don’t have to do anything special to shoot a good score here,” McIlroy said. “You can be really conservative off the tees if you want to be. There’s a bunch of irons that you can hit off tees. Take care of the par-5s — I think the toughest thing about this course is the par-3s and I played them in 3-under today. So that was a bonus.”

Conners, whose lone career victory came in 2019, also started his round on the back nine. He caught momentum early with birdies on his first three holes of the day and was at 6-under through seven holes after an eagle 3 at the par-5 16th hole. He added two birdies and two bogeys over his final 10 holes.

“I mean, I know this golf course can sneak up on you if you get a little too relaxed,” Conners said. “So I was off to a really great start there, my focus on 17, and my eighth hole, was 6-under par at the time. I was trying to hit a solid 5-iron, give myself another chance at birdie. Just take it one shot at a time. I think that’s really important out here.”

DeChambeau had a birdie at the par-5 sixth hole that wraps around a lake, but he did not try to drive the green, like he did unsuccessfully in a practice round. The putting surface is approximately 340 yards away from the tee with an all water carry.

“There was a high expectation level of me trying to go for the green there and it was a little pressure that I wasn’t expecting,” DeChambeau admitted. “… I pulled out an iron as a joke off the tee box. It was … more into the wind than anything.”

The big hitter teased that under the right conditions he might try the high-risk, high-reward shot in the second round.

Max Homa, who won two weeks ago at the Genesis Invitational, was in a big group tied for 15th place at 2 under, along with Jordan Spieth.

Defending champion Tyrrell Hatton of England struggled during the opening round, shooting a 5-over 77 that included bogeys on three of his final five holes.

Last year’s Arnold Palmer Invitational was the last played before the PGA Tour shut down for three months because of the COVID-19 pandemic.