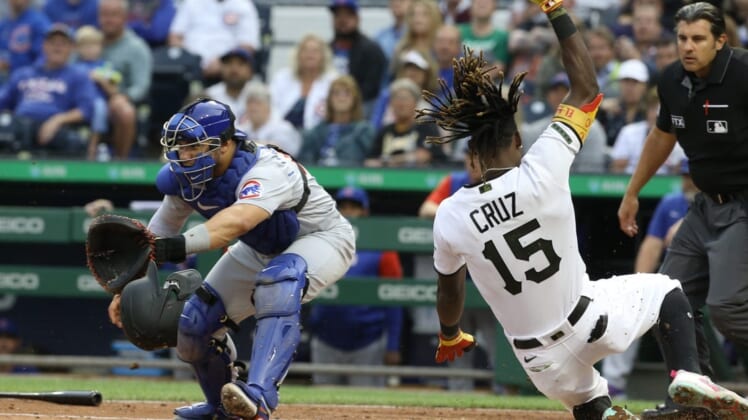 Oneil Cruz and fellow rookie Bligh Madris combined to go 5 for 9 with six RBIs after both were recalled earlier Monday, leading the Pittsburgh Pirates to a 12-1 pasting of the visiting Chicago Cubs.

Daniel Vogelbach added a two-run double, and Tyler Heineman an RBI double for the Pirates, who have won two straight after dropping 11 of 12.

Ian Happ hit an RBI single for the Cubs, who have lost two straight and 12 of 15.

There was a little of everything in the bottom of the second, when the Pirates staked a 3-0 lead.

Vogelbach and Michael Chavis walked before there was a brief delay while grounds crew members, accompanied by “The Benny Hill Show” theme music, chased a squirrel that had been running around the outfield all inning.

Cruz, making his season debut and playing in his third career game, reached on Jonathan Villar’s fielding error at second. Madris, in his big-league debut, drove in Vogelbach and Chavis with a single. An out later, Cruz scored on Hoy Park’s sacrifice fly.

Pittsburgh added four in the third. Bryan Reynolds and Jack Suwinski walked, and Vogelbach loaded the bases with an infield base hit. Reynolds scored on a Kilian wild pitch before Cruz’s three-run double, although Cruz was thrown out going for a triple.

Chicago broke the shutout against Tyler Beede in the seventh. Alfonso Rivas and Christopher Morel singled and, an out later, Happ hit an RBI single to make it 7-1.