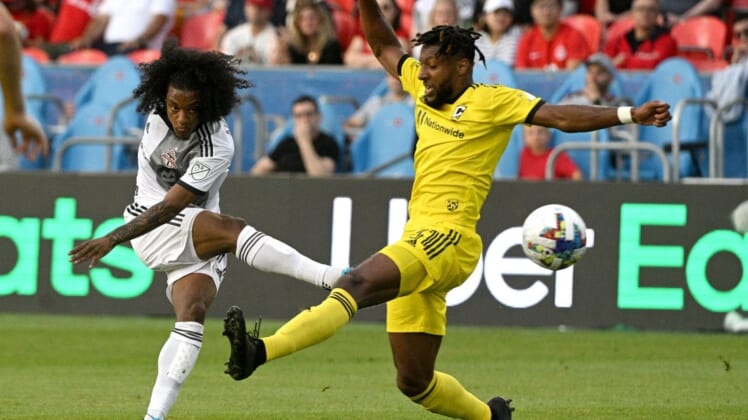 Zawadzki in the 18th minute and Darlington Nagbe in the 30th gave Columbus the lead before Jesus Jimenez responded for Toronto in the 54th minute.

Eloy Room made five of his six saves in the first half for Columbus, which is 2-0-1 in its past three away games.

The Crew, due to injuries to several starters, relied on their minor league affiliate, the first year Columbus Crew 2 in MLS NEXT Pro, for the first two scores. Zawadzki, 22, was promoted from Crew 2 for his MLS debut when he started at Real Salt Lake on Saturday.

He took a layoff from Toronto native Russell-Rowe and ripped a 25-yard shot for his initial MLS goal. Russell-Rowe entered the match with 34 career minutes off the bench in two MLS matches for the Crew.

Toronto has allowed at least one goal in 25 straight matches.

Russell-Rowe, 19, had the setup again when the Crew shredded the defense on the break at the half-hour mark. He was on the right flank when he laced a pass to Nagbe racing through the box. Nagbe has three goals this season.

The Crew announced on Wednesday afternoon that Russell-Rowe, who played for the Canadian U-17 national team and had one appearance for the Toronto FC II minor league team in 2019, was signed to an MLS contract through the 2024 season with options for 2025 and 2026.

Toronto cut the deficit in the half when Alejandro Pozuelo’s cross was headed by Jimenez for his eighth goal to end his seven-game goal drought.