Rookie Narin An jumps in front at CP Women’s Open 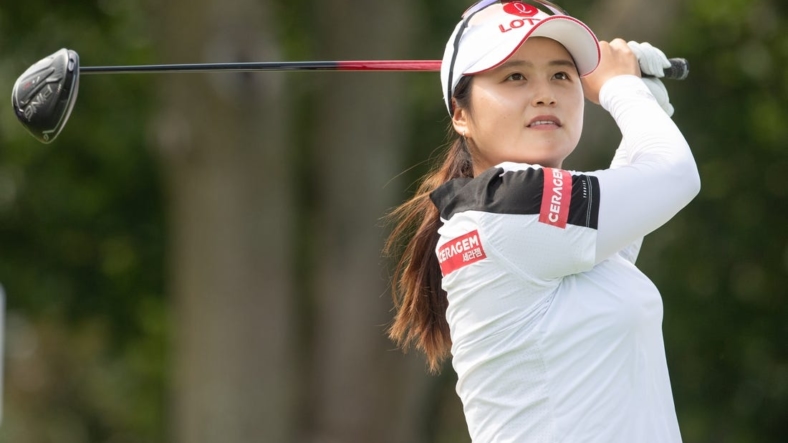 South Korea’s Narin An, an LPGA Tour rookie looking for her first win, held a two-shot lead at the CP Women’s Open when play was halted due to darkness on Friday in Ottawa.

Another South Korean rookie, Hye-Jin Choi, is tied for second with first-round leader Paula Reto of South Africa and the United States’ Nelly Korda at 11 under. Choi shot a 63 on Friday, tied for the best round of the day. Korda carded a 64 and Reto posted a 69.

The second round will conclude for 36 players on Saturday morning, at which point the cut will made to include the top 70 players and ties.

An, competing in her 17th tour event, posted her best result when she took third place at the JTBC Classic in Carlsbad, Calif., in March. She previously won twice on the Korean tour.

On Friday, she hit all 13 fairways and found 17 of 18 greens in regulation en route to her second consecutive bogey-free round.

“The birdie chances came from a lot of good iron shots and my putting was able to support those iron shots, and thus put up good results today,” An said.

Choi put together the lowest round of her 41 career tour starts.

“There was a lot of rain coming down before play so I had a feeling it would be tough today,” Choi said. “But I got to go out again from the first hole and the weather was great. My shot condition wasn’t great today, but lot of mid- to long-range putts were dropping and that helped reduce my score.”

Korda was 1 under par through her first seven holes before making six birdies and five pars the rest of the way.

“I was just hitting it really good,” Korda said. “I capitalized on pretty much all the par-5s. A lot were moved up, so for a long hitter, we have shorter clubs in and we can kind of take advantage of that. Just played some solid golf.”

Reto started hot again on Friday, sitting at 3 under through 6 holes, but she parred all of her remaining holes except for the par-5 ninth, where she made bogey.

The United States’ Lizette Salas (second-round 64) holds fifth place at 10 under. Two more U.S. players, Sarah Schmelzel (64) and Danielle Kang (66), are level with Japan’s Nasa Hataoka (67) in sixth at 9 under.

Defending champion Jin Young Ko of South Korea shot a 2-over 73 on Friday, leaving her at 1-under 141 and putting her in danger of missing the cut.