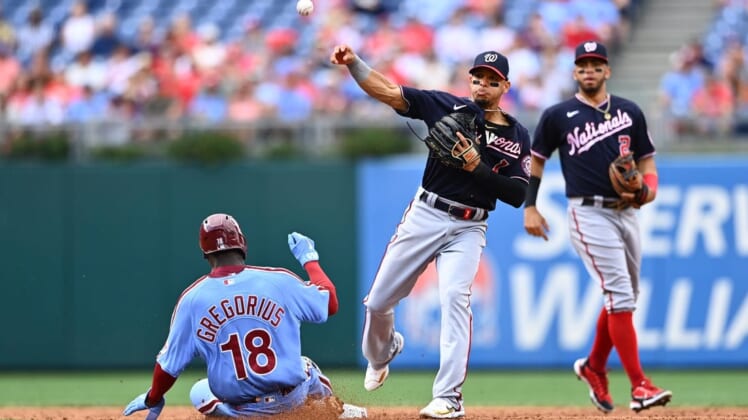 Rookie Darick Hall hit a solo home run, doubled and drove in two runs to lift the host Philadelphia Phillies past the Washington Nationals 5-3 on Thursday.

Didi Gregorius added an RBI triple for the Phillies, who won two of three in the series and continue to surge under interim manager Rob Thomson. The Phillies are 22-10 under Thomson, compared to 22-29 with previously fired Joe Girardi.

Phillies starter Bailey Falter tossed four innings and gave up six hits and two runs. He struck out six and walked one.

Nick Nelson (3-1) threw two scoreless innings to pick up the win in relief. Seranthony Dominguez pitched a scoreless ninth and earned his third save.

Juan Soto led the Nationals with two hits and an RBI, Ehire Adrianza added an RBI double and Maikel Franco chipped in with an RBI single.

After wasting a golden chance with second and third with nobody out in the first, the Phillies took a 3-2 lead in the third when Hall ripped an RBI double off the wall in center, J.T. Realmuto followed with a sacrifice fly to left and Gregorius lofted an RBI triple to right that missed being his first homer of the season by inches.

Kyle Schwarber hit an RBI groundout in the fourth and the Phillies led 4-2.

Philadelphia’s Jose Alvarado retired Soto, Josh Bell and Nelson Cruz in order in the seventh and struck out the side, flashing several pitches at 100-plus mph.

Hall hit a solo homer to right in the seventh off Steve Cishek and the Phillies moved out to a 5-2 advantage. It was already the fourth homer in eight games for Hall in his brief rookie season.

Adrianza shot an RBI double down the left-field line in the eighth and the Nationals closed within 5-3.

In the ninth, Cesar Hernandez lined out to Dominguez, Soto struck out looking and Bell flied out to deep left to end the game.