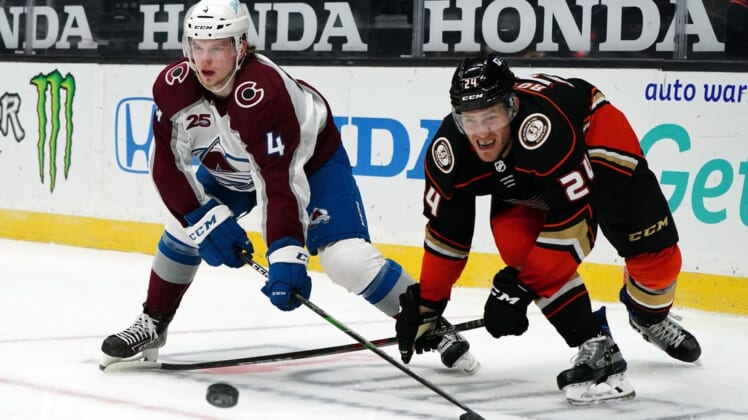 Colorado Avalanche defenseman Bowen Byram is just 19, yet he already has made an impact in two career games and will get another opportunity to grow Sunday as the Avalanche again meet the host Anaheim Ducks in Southern California.

Byram delivered his first point in Friday’s 3-2 overtime victory over the Ducks, assisting on a third-period goal by Mikko Rantanen on Friday, when he also took four shots in 14 minutes on the ice. He made his NHL debut Wednesday against the Los Angeles Kings, taking one shot in 11 minutes.

“I just got the puck at the top of the blue line and just tried to move my feet to create some space,” Byram said of his third-period assist Friday. “I saw Mikko on the back so I tried to get it to him, and he put it in the net, so it’s good. It was a big goal in a tight game, and it helped us get a win so that was the most important part.”

Rantanen’s fourth goal in four games gave Colorado a brief lead, with the Ducks tying the score just over a minute later on a goal by Adam Henrique. It is the first time in his career Rantanen has scored a goal in four consecutive games. He also has two assists during the run.

The Avalanche won the game 1:38 into overtime on a wraparound goal from Gabriel Landeskog, his third of the season. Goaltender Philipp Grubauer had 36 saves to improve to 3-1-0 with a .931 save percentage.

“I thought Grubi made some key saves on the (penalty kill),” Landeskog said. “For the most part there wasn’t that many rebounds laying around. He was definitely our best player.”

Colorado has won three of its last four, starting with an 8-0 victory at home over the St. Louis Blues, and is 2-1 on a four-game trip to Los Angeles and Anaheim. The Avalanche return home Tuesday for consecutive games against the San Jose Sharks.

The Ducks have won just once in five games to open the season and have averaged just 1.6 goals.

Anaheim’s struggling second line at least made its presence known Friday as Henrique scored his first goal of the season, while Danton Heinen and Jakob Silfverberg assisted for their first points of the season.

Hampus Lindholm scored his first goal of the season Friday for the Ducks, while goaltender John Gibson had 29 saves and stopped Colorado’s Nathan MacKinnon on a penalty shot in the third period to keep the game tied.

Despite just eight goals in five games and a 1-2-2 record, the Ducks are seeing reasons to believe a better brand of hockey is about to arrive.

“That’s the best game we’ve played,” Ducks coach Dallas Eakins said, referencing his team’s 38-32 advantage in shots. “I thought our guys played hard. We had lots of chances to score. We had lots of looks at their net. Some guys who maybe hadn’t had a lot of attempts on net, a lot of shots, woke up.”