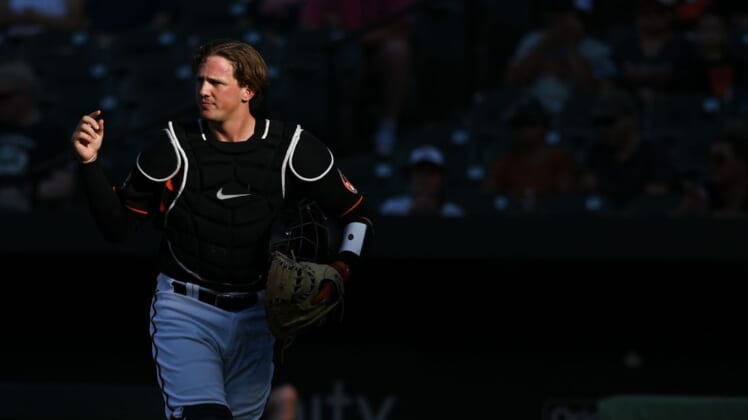 Rookie Adley Rutschman had an RBI single in the seventh inning to fuel the host Baltimore Orioles to a 1-0 victory over the Tampa Bay Rays on Friday.

Rutschman had two of the five hits for the Orioles, who have won five of their last seven games.

Baltimore’s Dean Kremer scattered five hits and fanned five over six innings before giving way to Felix Bautista (3-2), who struck out the side in the seventh. Cionel Perez bridged the gap to Jorge Lopez, who got the final four outs — all via strikeout — for his 10th save of the season.

Rookie Vidal Brujan and Ji-Man Choi each had two hits for the Rays, who have lost a season high-tying four in a row and six of seven games to begin their nine-game road trip.

Tampa Bay rookie Shane Baz celebrated his 23rd birthday by scattering two hits and striking out seven batters over six innings. Baz struck out the side in the sixth and exited after 76 pitches.

Calvin Faucher (0-1) relieved Baz to start the seventh and saw Ryan Mountcastle extend his hitting streak to seven games with a one-out double to left-center field. Mountcastle didn’t stay on second base for long, however, as he came around to score on a single into shallow center by Rutschman.

Rutschman is 5-for-11 with three extra-base hits (two doubles, home run), four RBIs and three runs over his last three games. The top overall pick of the 2019 draft out of Oregon State, Rutschman went 8-for-54 with 14 strikeouts over his previous 15 games.

Tampa Bay mounted a threat in the eighth inning after Taylor Walls and Manuel Margot singled off Perez. Perez, however, struck out Brujan and Lopez did the same to Yandy Diaz.

Baltimore attempted to open the scoring in the fifth inning as Rutschman reached on an infield single and advanced to third with two outs. Baz ended the threat by inducing Jorge Mateo to ground out to shortstop.