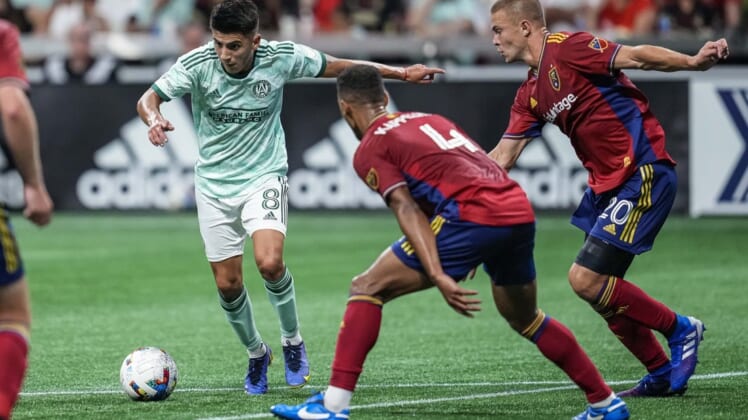 Two first-half goals from Ronaldo Cisneros were enough to carry Atlanta United FC to a 2-1 victory over visiting Real Salt Lake on Wednesday.

The result was much-needed for Atlanta (6-8-5, 23 points) after it suffered its worst home loss in the club history on Saturday, falling 3-0 to Austin FC. Wednesday’s win was just the second for Atlanta in its last nine games.

Cisneros scored his first goal in the seventh minute after Thiago Almada fired a through ball up the right side of the pitch, threading it between two RSL defenders. Cisneros ran onto the ball, spun around a defender near the edge of the box, and then tucked a low shot just inside the far post.

Atlanta went up 2-0 when Cisneros found the back of the net again in the 33rd minute. This time, he was assisted by Matheus Rossetto, who gave Cisneros a feed just outside the top of the box. The Mexican forward created space, dancing with two RSL defenders, then cut back and fired a left-footed shot past keeper Zac MacMath.

The goals were the fifth and sixth of the season for Cisneros. He was subbed off in the 77th minute for Josef Martinez — the former Golden Boot winner who expressed his displeasure with the club’s effort on Saturday against Austin.

Real Salt Lake scored their lone goal in the 37th minute when Justin Meram crossed in a soft ball that hung in the air until defender Johan Kappelhof leapt and met it with his head, guiding the ball under the crossbar and into the net. The goal was the first of Kappelhof’s MLS career, coming in his 151st appearance in the league.

This was the first meeting between Atlanta and RSL since May 2019. The two sides do not meet again for the rest of the regular season.