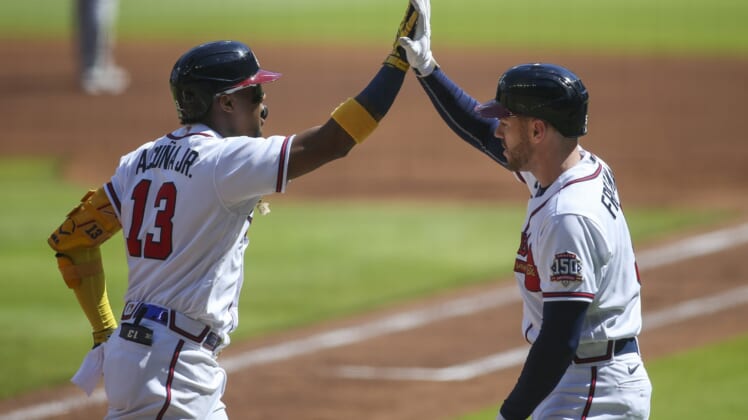 Freddie Freeman wasn’t adored by everyone in Atlanta, it turns out.

When asked by Pujols what he would miss about Freeman, Acuna responded, “Me? Nothing.”

Acuna and Freeman were teammates for four seasons, since Acuna broke into the league as Rookie of the Year in 2018.

“We were close in that we shared the same stadium,” Acuna told Pujols, “but we had a lot of, how do you say …”

Acuna didn’t take well to being told how to behave by Freeman and other veterans when he was a rookie.

“When you come up as a rookie, there’s always someone who (wants to tell you how to do things),” Acuna said. “You come up from the minor leagues with the big eye black, the sunglasses, the hat low, and a lot of people see that as wrong. And the other person doesn’t see it as wrong because it’s part of the game. A lot of veterans (picked on me) when I was a rookie and they called me into the office themselves and told me, ‘No, you can’t use that’ and they took it off me with a towel like that.”

Acuna added he stayed quiet because he was a rookie.

“I can’t say anything, you know? I just said, ‘One day I’ll be a veteran.’ I’m not saying I’m a veteran right now, but nobody’s gonna take the eye black off my face now, you know?” Acuna said.

Acuna continues to recover from a torn ACL he suffered last season. He’s a two-time All-Star, including last season when he batted .283 with 24 home runs in just 82 games before the injury.

Freeman signed with the Los Angels Dodgers as a free agent on March 17. He’s a five-time All-Star and National League MVP in 2020.