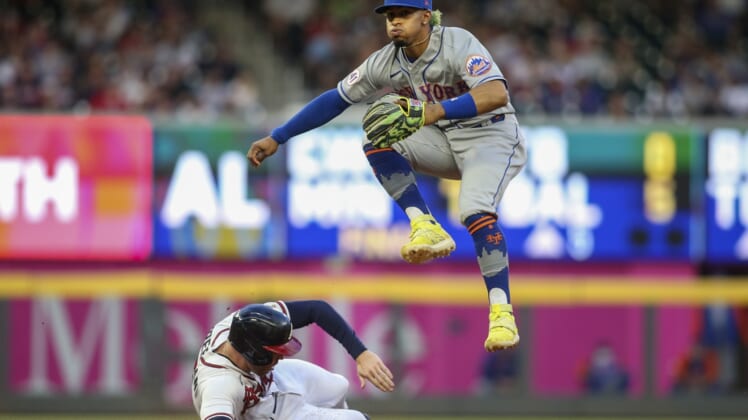 Ronald Acuna Jr. hit a walk-off home run to lead off the ninth inning and give the Atlanta Braves a 5-4 win over the visiting New York Mets and end their three-game losing streak.

The home run, his 13th, came off Jacob Barnes (1-1) and ended an 0-for-13 streak, dating back to before he missed time with a left ankle injury.

The winning pitcher was Will Smith (1-4), who struck out two batters in the ninth. Smith stranded a runner at third and worked around two wild pitches to keep the game tied.

Neither starter received a decision. Atlanta’s Charlie Morton, working on an additional day off, was back in form after four straight subpar performances. The 14-year veteran pitched six innings and allowed one run on two hits and no walks. He struck out eight.

The Mets scored a run in the fourth inning on Jonathan Villar’s solo homer, his fourth.

The Braves sent nine batters to the plate in the fifth and took a 3-1 lead. Guillermo Heredia and Morton both singled in a run, and Acuna walked with the bases loaded.

Atlanta left the bases loaded in the fifth and sixth innings.

The Braves gambled in the sixth and lifted Morton, who had thrown only 79 pitches, in favor of pinch-hitter Pablo Sandoval to try to break the game open. But Sandoval lined to third base to end the threat.

The Mets were able to start a two-out rally in the seventh when reliever A.J. Minter committed a two-base throwing error. Jose Peraza drove in a run with a double, and Tomas Nido added a two-run single to shallow center to give the Mets a 4-3 lead.

The Braves tied the game in the eighth. Austin Riley doubled off the right-field wall, went to third on Dansby Swanson’s infield single, and scored on William Contreras’ single to right.

Swanson ran the team out of the inning when he was caught trying to steal third base.