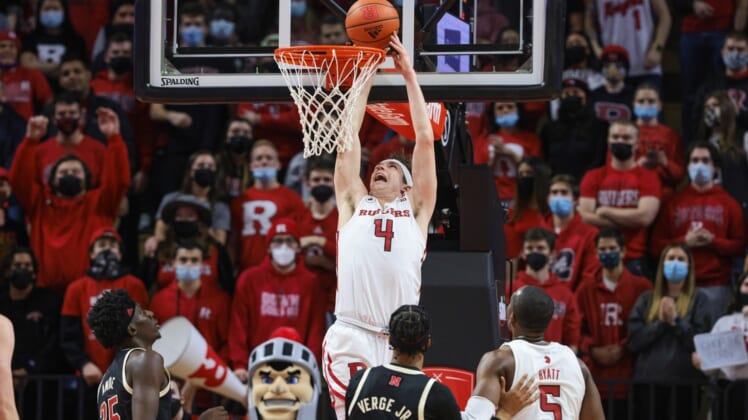 Ron Harper Jr. rang up 29 points to steer Rutgers to an easy 93-65 win over visiting Nebraska on Saturday afternoon in Piscataway, N.J.

Paul Mulcahy finished with 10 points, eight assists and seven rebounds. Aundre Hyatt came off the bench for a season-high 13 points and Cliff Omoruyi had 10 points for Rutgers (9-5, 3-1 Big Ten), which won its third straight league contest.

The Cornhuskers failed to notch their first Big Ten win of the season and lost for the eighth time in nine games.

Both sides shot the ball efficiently, with Rutgers at 58.3 percent and Nebraska at 49.1 percent. But Rutgers controlled the game by making nine more field goals overall and going 10-for-18 from 3.

Nebraska opened up an 11-6 lead early before Rutgers shifted into gear. Hyatt and Reiber entered the game and each made a bucket before connecting on back-to-back 3-pointers. Those shots put Rutgers in the lead and launched an 11-0 run that gave the Scarlet Knights a 25-16 lead.

Rutgers began pulling away via steals and transition offense. Harper went 7-for-7 from the foul line in the first half and dished an assist to the low block to set up Reiber for a dunk in the final second, making it 44-31 at halftime.

A couple of deep shots from Harper pushed Rutgers’ lead to 57-37, its largest advantage to that point. One last 10-0 stretch locked it up for Rutgers late, when Reiber’s second 3-pointer and an Omoruyi dunk made it 82-54.