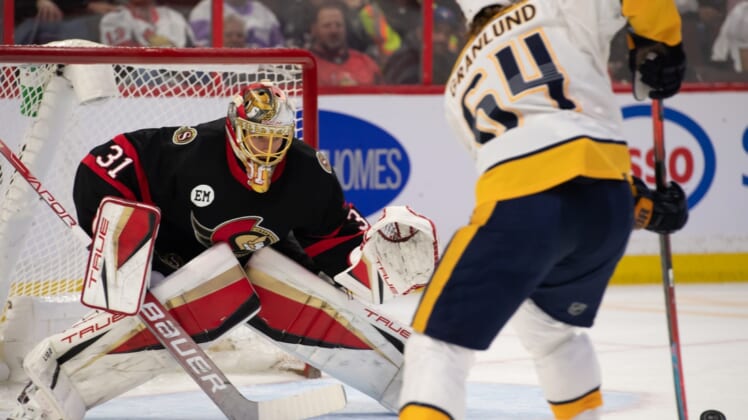 Josi has 68 assists to go along with 19 goals during his career year. With 87 points, Josi topped Paul Kariya’s previous franchise record of 85 points in the 2005-06 season. Josi is also just the 13th defenseman in NHL history to record 85 or more points in a season.

The victory extended Nashville’s lead atop the Western Conference wild card standings. The Predators (41-25-4, 86 points) also moved within four points of the St. Louis Blues for third place in the Central Division.

Matt Duchene had a goal and an assist for the Predators. Duchene has eight points (three goals, five assists) over a five-game points streak.

Tanner Jeannot and Ryan Johansen also scored, with Johansen collecting the game-winner on a power-play goal at 12:38 of the third period. Johansen has three power-play goals in his last two games.

Special teams also were a major factor at the other end of the ice, as Nashville killed off all four of Ottawa’s power-play attempts.

Mathieu Joseph and Josh Norris scored for the Senators (26-38-6, 58 points), who were looking for their first four-game winning streak of the season.

Since being acquired in a trade from the Tampa Bay Lightning on March 20, Joseph has 11 points (four goals, seven assists) in eight games with the Senators.

Norris also has been hot, as his third-period goal extended the forward’s points streak to a career-best seven games.

Nashville goalie Juuse Saros stopped 27 of 29 shots. Saros earned his 35th win of the season, tying him with the Lightning’s Andrei Vasilevskiy for the league lead.