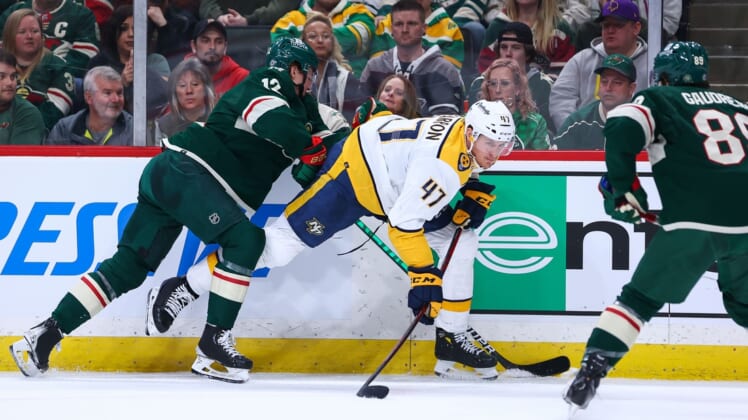 Roman Josi had two goals and two assists as the Nashville Predators moved into a tie for third place with Minnesota in the NHL’s Central Division, defeating the host Wild 6-2 Sunday night in St. Paul, Minn.

Filip Forsberg (two goals, one assist) and Nick Cousins (one goal, two assists) had three points apiece and Philip Tomasino added a goal and an assist for Nashville, which not only spoiled the opener of Minnesota’s franchise-long, nine-game homestand, but also the jersey retirement ceremony of Mikko Koivu, the first Wild player so honored. Predators goaltender David Rittich made 26 saves.

Matt Boldy and Jordan Greenway scored for the Wild and Kaapo Kahkonen stopped 19 of 23 shots.

Tomasino broke a 2-2 tie 12 minutes into the second period. Cousins’ shot from top of the right faceoff circle was stopped by Kahkonen, but Tomasino was in the right place to convert the rebound.

Josi scored his second of the game on the power play at 1:05 of the third, beating a screened Kahkonen on a slap shot from the blue line, to make it 4-2.

Forsberg and Cousins added empty-net goals in the final 2:18.

Forsberg opened the scoring at 8:24 of the first period, tipping Dante Fabbro’s shot from the right point past Kahkonen. It was Forsberg’s 30th goal of the season.

The Wild tied it at 13:03 of the period as Boldy pounced on a loose puck to the right of the net and put a shot over Rittich’s shoulder from a sharp angle.

The Predators regained the lead at 8:44 of the second as Josi kept the puck in the offensive zone at the left point, skated down the center of the ice and lifted a backhander into the net from between the hashmarks.

Greenway tied the score at 2-2 at 11:10 of the second on a three-on-two rush. Marcus Foligno fed Greenway on the right wing and he put a wrist shot just inside the far post for his first goal in 22 games.