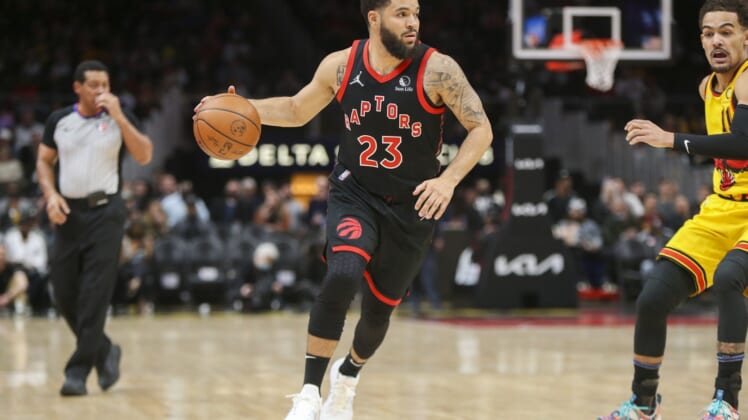 The Toronto Raptors have embraced their current suitcase lifestyle and will look to continue their recent road success when they face the Los Angeles Clippers on Wednesday in their second consecutive game in Southern California.

The Raptors defeated the host Los Angeles Lakers 114-103 on Monday for their fourth consecutive victory, all on the road. The trip started with a loss at Cleveland on March 6, followed by victories at San Antonio, Phoenix, Denver and L.A.

The 117-112 victory over the Suns on March 11 was the biggest sign the Raptors have hit their stride and are feeling good about their chances to move into the top six of the Eastern Conference standings and avoid a play-in game for the playoffs.

Toronto currently is in seventh place in the East, one game behind the Cleveland Cavaliers. The top six in each conference are guaranteed a playoff berth.

After matching a season high with 42 points against the Suns last week, Gary Trent Jr. led the way with 28 against the Lakers on Monday. Pascal Siakam had 27 points, but rookie Scottie Barnes’ 21 points might have been the most influential since 15 of those came in the first quarter when the Raptors opened a 33-12 lead.

“Understanding the time and score and kind of where we are, feeling the flow and the momentum is something that I was on (Barnes) about earlier in the year,” the Raptors’ Fred VanVleet said, according to the team website. “He’s definitely shown a lot of growth in that area.”

Barnes, last year’s fourth overall draft pick out of Florida State, has averaged 15.3 points per game this season. Since the All-Star break, he’s averaging 19.2 points, helping to pick up the slack with OG Anunoby out because of a fractured right ring finger.

“There’s really nothing he can’t do out there on the court,” Van Vleet said of Barners. “It’s just about confining that into winning basketball because he has a huge role on this team.”

The Clippers return home for just one game after going 1-2 on a trip to Atlanta, Detroit and Cleveland. Los Angeles is coming off a 120-111 overtime loss to the Cavaliers as Ivica Zubac scored 24 points with 14 rebounds on Monday.

The Clippers rallied from a nine-point deficit with 6:14 remaining but went just 1 of 10 from the field in overtime to fall for the fourth time in their past six games. The stumble has come after a five-game winning streak, but those victories came against the Houston Rockets (three games) and Lakers (two games).

Los Angeles was without key contributors Marcus Morris Sr. and Reggie Jackson on Monday as both were given a day of rest. The duo combines to average more than 33 points per game.

“Thought we did a great job, just competing,” Clippers head coach Tyronn Lue said. “I thought we ran out of gas, especially when we had to go into overtime. That really hurt us.”

The Clippers also are in play-in game territory in the standings, but their path to sixth place in the standings is more challenging than the Raptors’. At the start of play Tuesday, the Clippers were six games behind the sixth-place Denver Nuggets.