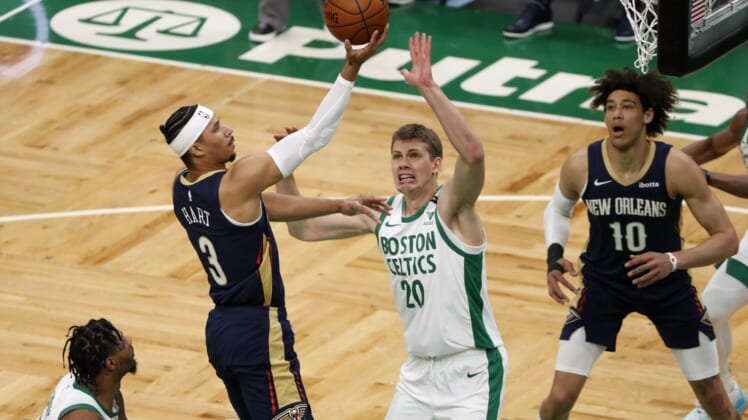 Zion Williamson and Brandon Ingram are one of the highest-scoring tandems in the NBA.

But it’s the help they have gotten from role players and the team’s defense that have helped the New Orleans Pelicans win four of their past five games heading into their home game against Orlando on Thursday night.

The Pelicans are allowing an average of 108.8 points during their past five games, which is about seven points a game less than their season average.

“We’re (46 games) into the season,” Hart said. “We’re growing every day in terms of trust and camaraderie and everything like that.”

In their most recent game, a 115-109 victory at Boston on Monday, the Pelicans held the Celtics to 43-percent shooting from the field.

“I thought the defense down the stretch was really good,” Pelicans coach Stan Van Gundy said. “We really fought hard. I was happy with what we did.”

Williamson played well enough to be named an All-Star, but he has been even better recently, averaging 32.4 points during the past five games. He has received support from teammates other than just Ingram recently.

Hart had 15 points and 15 rebounds against the Celtics; Ball is listed as questionable for Thursday.

The Magic had lost 13 of their past 15 games before a fourth-quarterback comeback produced a 103-96 win against the host Clippers on Tuesday, ending Los Angeles’ six-game winning streak.

“This league is all about wins,” said Wendell Carter Jr., whose tip-in gave Orlando the lead for good with 1:10 remaining. “We took a great step forward in the right direction. It definitely is a confidence-booster going up against one of the best teams in the Western Conference and getting a win on the road.”

The victory ended a seven-game road losing streak for the Magic.

“Wendell is a smart player,” said rookie Chuma Okeke, who led the Magic with 18 points. “He is also smart off the court, so he is going to pick up things very, very quick — quicker than most guys.”

Otto Porter Jr. finished with 13 points as the Magic outscored the Clippers 33-23 in the fourth quarter, and Carter ended with 11 points.

“We have been a little bit limited in this stretch due to being on the road but continue to add things, even if it is teaching them in a ballroom,” Orlando coach Steve Clifford said. “This is the style we are going to have to play. We have to defend and be smart.”