Aug 26, 2019; Flushing, NY, USA; Roger Federer of Switzerland waves to the crowd after his win over Sumit Nagal of India in the first round on day one of the 2019 U.S. Open tennis tournament at USTA Billie Jean King National Tennis Center. Mandatory Credit: Danielle Parhizkaran-USA TODAY Sports

“During the grass court season, I unfortunately experienced a setback with my knee, and have accepted that I must withdraw from the Tokyo Olympic Games,” he posted on social media. “I am greatly disappointed, as it has been an honor and highlight of my career each time I have represented Switzerland.

“I have already begun rehabilitation in the hopes of returning to the tour later this summer. I wish the entire Swiss team the best of luck and I will be rooting hard from afar. As always, Hopp Schwiz!”

Federer, 39, won a silver medal at the 2012 Summer Games in London, losing to Britain’s Andy Murray in the final.

He won a gold medal in doubles at the 2008 Olympics in Beijing, partnered with Stan Wawrinka. 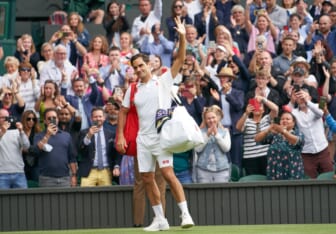 The 20-time Grand Slam champion is coming off a loss in the Wimbledon quarterfinals last week to Hubert Hurkacz of Poland.

Barring further setbacks, Federer’s “later this summer” timeline would put him on track for the U.S. Open set to start on Aug. 30.

Federer underwent two surgeries on his right knee in 2020 and missed the 2021 Australian Open in February. In June, he was forced to withdraw from the French Open after his third-round victory due to problems with the knee.